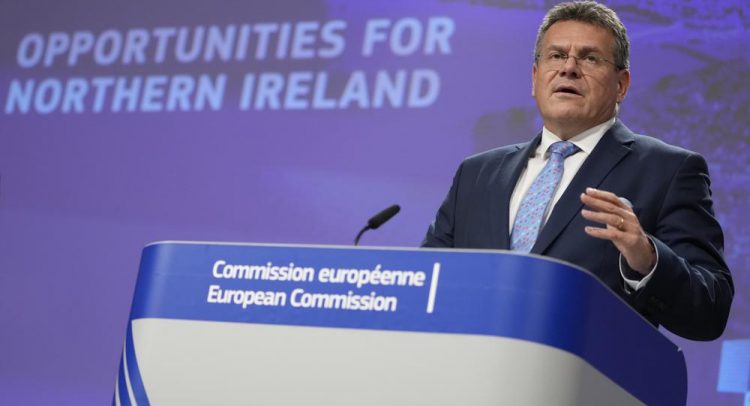 BRUSSELS (AP) — The great Brexit brawl headed into its next standoff Wednesday when European Union concessions to improve trade in Northern Ireland were likely to be deemed insufficient by the United Kingdom.

The EU’s top Brexit official, Maros Sefcovic, proposed major practical changes in the Byzantine system of customs and checks in Northern Ireland, which is U.K. territory but remained part of the EU’s borderless trading market when the U.K. left the bloc last year.

Under the new rules put in place this year, goods must be checked between Britain and Northern Ireland and meet EU standards. Sefcovic proposed changes under which he said checks on food, plants and animals could be cut by 80% and paperwork for transport companies in half.

However welcome such a cut in red tape might be to London, the U.K is also insisting on a further, fundamental change. It wants the EU to cede final legal oversight by its top court of any trade disputes and instead make them subject to independent arbitration. No such concession was forthcoming from Sefcovic Wednesday.

“It’s very clear that we cannot have access to the single market without the supervision of the European Court of Justice,” Sefcovic told reporters, rejecting any chance that the EU would yield to the British government on the issue.

EU officials, many of the remaining 27 member nations and the bloc’s parliament have bristled at the thought that the EU’s Court of Justice would lose its preeminence over part of its trading market that spans a area of some 450 million people, and Sefcovic’s room for maneuver is narrow in negotiations starting later this week.

U.K. counterpart David Frost was hoping for a drastic overhaul of the Northern Ireland deal. He warned Wednesday that the role of the EU’s top court “has to change if we’re to find governance arrangements that people can live with.”

“Short-term fixes will not solve the problems that have beset the United Kingdom internal market,” Donaldson said.

Both Britain and the EU agreed it was essential to avoid a hard land border between Northern Ireland and EU member Ireland, the only part of the bloc to have a land border with the U.K. after Brexit. Northern Ireland was the scene of deadly sectarian violence before the border posts were brought down as a key part of the 1998 Good Friday agreement.

The EU thought years of Brexit wrangling were over when the government of British Prime Minister Boris Johnson officially signed the legally binding divorce agreement and the subsequent free trade deal at the end of last year. The deal called for establishing a border in the Irish Sea to regulate trade between Northern Ireland and the U.K.

Now, the EU says Johnson is seeking to row back on the Northern Ireland deal that he himself signed.

“That would indicate that this is a government, an administration, that acted in bad faith and that message needs to be heard around the world,” Irish Deputy Prime Minister Leo Varadkar told Irish broadcaster RTE.

France has similarly said that Britain can’t be trusted in a dispute over fishing licenses that Paris said should have long been granted as part of the signed trade deal with London.

It is in such a heated context that Sefcovic now must negotiate with Frost to smooth trade in Northern Ireland. Their first meeting is scheduled for Friday in Brussels. Both refrained from making any belligerent comments on Wednesday.

They will assess the wide-ranging proposals to cut the paperwork for goods entering Northern Ireland, and eliminate impediments that have created irritants — such as when British Cumberland sausages couldn’t make it onto Belfast dinner tables because of EU rules on chilled meat.

But the EU insists that any concession on cutting red tape must also be met by a U.K. commitment to vigilance in monitoring and performing customs checks on goods sent from Britain across the Irish Sea into Northern Ireland.

Jill Lawless in London, and Sylvie Corbet in Paris, contributed to this report.