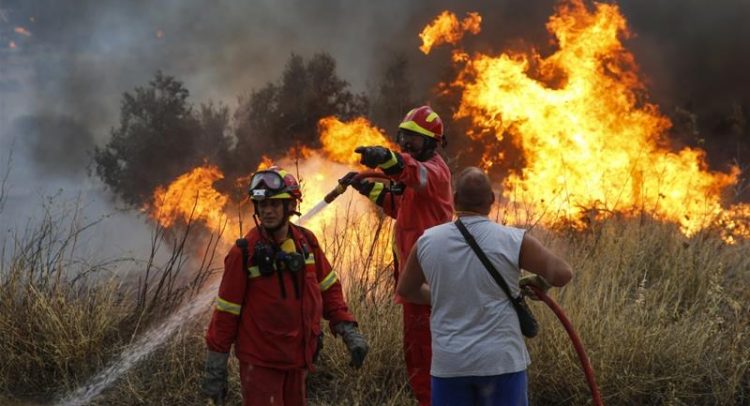 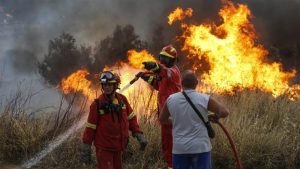 Authorities on Monday declared a state of emergency in two areas near Athens and said Greece would call on the European Union for assistance.

The first blaze broke out in a forest near the coastal settlement of Kineta, some 55km west of the capital.

Residents were urged to abandon their homes as the ferocious fire closed one of Greece’s busiest motorways, shut train services and sent plumes of smoke over the capital.

Later in the late afternoon, a large fire also erupted north and east of Athens. A local mayor said he saw at least 100 homes and 200 cars engulfed in flames.

“People should leave, close up their homes and just leave. People cannot tolerate so much smoke for so many hours,” said Achilleas Tzouvaras, a senior fire chief, appalling to people to leave the area after some tried to stay put in their properties.

“This is an extreme situation.”

Live footage showed thick plumes of smoke hanging low over Rafina, an area east of Athens which has a population of at least 20,000. The town itself has dense vegetation. A local mayor said he saw at least 100 homes and 200 cars engulfed in flames.

“I personally saw at least 100 homes in flames,” said Evangelos Bournous, mayor of the Rafina-Pikermi area. “I saw it with my eyes, it is a real total catastrophe.”

The army was also drafted in on Monday afternoon to help fight the blazes.

Commenting on the situation, Greek Prime Minister Alexis Tsipras said during an official visit in Bosnia: “We will do whatever is humanly possible to control it.” He also hinted that so many fires at once needed further scrutiny.

“I’m concerned at the simultaneous outbreaks both east and west of Attica,” added Tsipras, who later cut short his trip abroad and was scheduled to return to Greece. Wildfires are not uncommon in Greece, but a relatively dry winter has created tinderbox conditions.

Alcohol's health risks are far easier to prove than its benefits