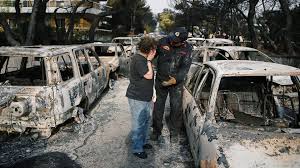 Survivors of huge wildfire near Greece’s capital recounted Tuesday how families fled into the sea to escape advancing flames. The death toll also rose to at least 60.

More than 150 other people were injured as the country’s worst blaze in more than a decade swept through the coastal resort of Mati, 18 miles east of Athens.

Residents scrambled to the water’s edge as the blaze closed in. Hundreds were rescued by passing boats but others found their way blocked by smoke and flames.

Many victims died after becoming trapped in their cars, photographer Giorgos Moutafis wrote on Facebook, while others drowned.

“I was briefed by a rescuer that he saw the shocking picture of 26 people tightly huddled in a field some [100 feet] from the beach,” Nikos Economopoulos, the head of Greece’s Red Cross, told Skai TV. “They had tried to find an escape route but unfortunately these people and their kids didn’t make it in time.”

Many victims appeared to be hugging when they died, he added. One of the youngest was thought to be a six-month-old baby.

Coast guard and other vessels rescued 696 people who had fled to beaches. Boats plucked another 19 people from the sea.

Local resident Andreaas Passios said: “I grabbed a beach towel. It saved my life. I soaked it, grabbed my wife and we ran to the sea. It was unbelievable. Gas canisters were exploding, burning pine cones were flying everywhere.”

Nikos Stavrinidis said he ran to the sea with his wife and friends. “We had to swim out because of the smoke, but we couldn’t see where anything was,” he told The Associated Press.]

There were six people in his group: Stavrinidis, his wife and some of her friends. They swam further out to escape the smoke, but as they did so, they began to be carried away by the wind and the current. They lost sight of the shore and became disoriented. “We couldn’t see anything,” he said.

“We didn’t all make it,” Stavrinidis said. One of the women in his group and one woman’s son drowned.

“What upsets me and what I will carry in my heart is that it is terrible to see the person next to you drowning and not be able to help him. You can’t. That’s the only tragic thing,” he said, his voice breaking. “That will stay with me.”

Some parts of Mati were still smoldering with white smoke early Tuesday. Burned-out cars were scattered outside gated compounds where three- and four-story buildings bore signs of fire damage.

Wildfires are not uncommon in Greece, and a relatively dry winter helped create current tinder-box conditions. It was not immediately clear what ignited the fires.

Another big blaze in Kineta, about 30 miles west of Athens, was fanned by gale-force winds.

Motorist Giannis Labropoulos said he and his wife were “terrified” to see flames licking the sides of the main highway between Patras and Athens.

“In less than a minute, we saw smoke covering the road,” he told Euronews. “And then all of a sudden, the fire really covered everything … I stopped [recording video] in order to be able to see in front.”

Heavy rain is forecast across southern Greece on Wednesday.

It was the deadliest fire season to hit Greece in more than a decade. More than 60 people were killed in 2007 when huge fires swept across the southern Peloponnese region.