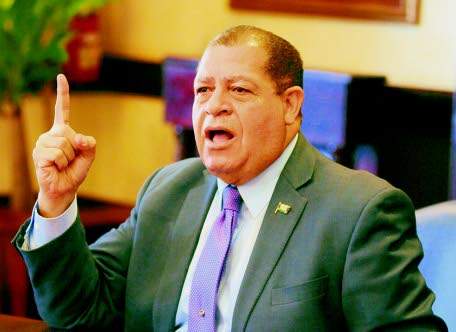 Growth will fall below 2% target — Shaw 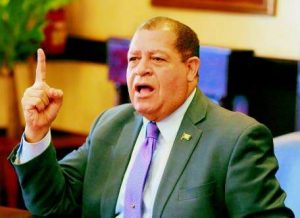 Minister of Finance and the Public Service, Audley Shaw, says that the Jamaican economy is projected to grow by just over one per cent for the 2017/18 fiscal year.

The finance minister admitted last Wednesday that this would fall well below the 2.3 per cent to 2.5 per cent growth he had predicted for 2017/18 up to late last year.

However, with the drought and other negative factors extending into the new calendar year, the minister now admits the likelihood of an approximately one per cent growth for fiscal 2017/18, which ends on March 31.

He admitted at Wednesday’s “Conference on Crime”, held at the Jamaica Pegasus, New Kingston, and hosted by the Financial Investigations Division (FID) – an agency of his ministry – that the growth outcome had been stifled by bad weather conditions and a slower than expected start-up of the Alpart Alumina Plant.

According to Shaw, during the first half of the fiscal year (April-September 2017), Hotels & Restaurants grew by 4.6 per cent, reflecting increased stopover arrivals which were facilitated by increased room stock, increases in the number of flights and in flight frequency.

Electricity & Water Supply was up 1.2 per cent and Other Services up 1.2 per cent, reflecting increased activities in the Recreational, Cultural & Sporting Activities associated with higher visitor arrivals.

Manufacturing grew by 1.7 per cent, recording its ninth consecutive quarter of growth, while Construction recorded growth of 1.2 per cent.

Construction has been gaining momentum, he said, and this was obvious in the Kingston Metropolitan Area, as well as other parts of the island.

In terms of employment creation, Shaw told the conference that the country experienced the highest rate of job growth in a single year over the last 10 years.

He noted that the labour force had increased as a result of mounting optimism and more people seeking jobs.

Employment in the Tourism and BPO sectors has been experiencing exponential growth in the last few years, he pointed out.

“There are approximately 26,000 people currently employed in the BPO industry across the island, with some 60 companies of varying sizes operating from our shores. This is indicative of the level of growth seen over the last 5-10 years,” he said.

Shaw said that the development of a vibrant BPO industry locally has been identified by Government as one of the major pillars of further economic growth, through the attraction of direct investment and the creation of avenues to earn foreign exchange.

“The tourism industry closed out last year surpassing all previous records. We ended the year with 4.3 million visitors coming to Jamaica. That is nearly 500,000 more visitors in a single year. This is unprecedented for anywhere in this part of the Caribbean,” he told the conference.

“The Ministry of Tourism has targeted the development and strengthening of sustainable linkages between the tourism sector and other productive sectors of the economy – such as agriculture, manufacturing and entertainment – to which it is closely linked. The aim is to increase the consumption of goods and services that can be competitively sourced locally, and to create employment while generating and retaining the country’s foreign exchange earning potential,” he added.

He said that the Jamaican economy now boasts record Net International Reserves (NIR) of US$ 3.2 billion, and approximately 80 per cent of that stock is in non-borrowed reserves. Gross Foreign Reserves now stand at a total of US$3.8 billion.

On debt levels and interest rates, he noted that the debt to GDP ratio has continued to fall.

“The nominal debt stock has been on a downward trajectory during the fiscal year, decreasing by approximately 3 per cent between April and December, 2017, and the debt to GDP ratio is projected to fall to approximately 105 per cent at end fiscal year 2017/18,” he stated.

The debt to GDP ratio is projected to be 60 per cent or less at end of financial year 2025/26, which is in line with the legislated ceiling established in the Financial Administration and Audit (Amendment) Act.

Summing up, Shaw said that Jamaica has been positioned in “a whole new light in the eyes of our international creditors”.

“This is something that we intend to build on. A reflection of the more favourable view of Jamaica is evidenced by our bold and successful entry into the international bond market in August 2017,” he argued.

“You will recall that we initially entered the market after my investor road show in June 2017, for US$300 million that was required for budgetary support. This offer was oversubscribed 10 times with total orders of US$3 billion,” he recalled.

“With this massive oversubscription, we decided to take US$1 billion instead and simultaneously redeemed more expensive local and overseas debt. The yields were five per cent on bonds due in 2028 and 6.45 per cent for those due in 2045 – historical lows in the international capital market,” he pointed out.

“Today, the Government is reopening our Benchmark Investment Note due 2021, with an auction for J$5 billion. We expect the resulting yield at this auction to be at an all-time low,” he told the FID conference.

“In terms of affordable and easy access to credit for small businesses, we have developed a specialised window, within the Development Bank of Jamaica, to develop alternative credit lines, especially for the MSME sector. We are looking at expanding and making more accessible the partial credit guarantee scheme operated by that entity,” he stated.

“This improved credit enhancement facility will allow banks to lend more against a given amount of collateral, because DBJ will underwrite a part of the risk on their loan,” he said.

Shaw added that the government acknowledges the work of our multilateral partners at the World Bank and the IDB in providing an investment loan to substantially expand this existing Credit Enhancement Fund.