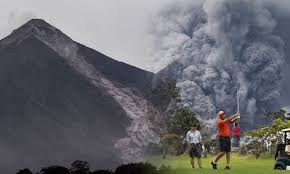 At least 192 people are missing and 75 are dead as a result of the explosion of the Fuego volcano in Guatemala on Sunday, officials say.

Villages on the slopes were buried in volcanic ash and mud.

Rescue work on Tuesday was disrupted when a new eruption sent hot gas and molten rock streaming down the volcano’s south side.

More than 1.7 million people have been affected by Sunday’s eruption, with more than 3,000 evacuated.

Tuesday’s explosion took many by surprise after volcanologists said the eruption, which had sent ash up to 10km (33,000ft) into the sky on Sunday, was over for the near future.

Eddy Sanchez, the head of Guatemala’s National Institute of Seismology, had predicted “no imminent eruption over the next few days”.

A village wiped off the map

Boris Rodriguez has no-one to turn to now. He lost more loved ones in a single night on Sunday than many do in a lifetime.

Mr Rodriguez’s wife, both of her parents, his brother and sister-in-law and their children died when the Fuego volcano erupted.

“I saw the children’s bodies,” he told me between sobs. “They were huddled together in the bed, like they were trying to hide from what was happening.”

If Mr Rodriguez, who is 25, were a solitary case, it would be heartbreaking enough. But most of his neighbours in the village of El Rodeo have similar stories of grief. The village was almost entirely wiped off the map.