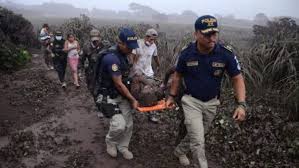 Guatemala’s most violent volcano eruption in more than a century has killed at least 25 people.

The Fuego volcano, about 40km (25 miles) south-west of the capital Guatemala City, spewed rock, gas and ash into the sky on Sunday.

Fast-moving flows hit villages, killing people inside their homes. Hundreds were injured and many are missing. The country’s main airport is closed.

In a statement issued late on Sunday, he spoke of the nation’s “deep pain” caused by the “irreparable losses” in human lives.

How exceptional was the eruption?

Fuego is one of Latin America’s most active volcanoes. A major eruption devastated nearby farms in 1974, but no deaths were recorded.

Another eruption in February this year sent ash 1.7km (1.1 mile) into the sky.

Sunday’s event was on a much greater scale. Ash reached up to more than 6km.

A mix of red-hot rock and gas, known as a pyroclastic flow, rushed down the mountainside and engulfed villages. Unlike slow-moving lava, which people may be able to escape from on foot, pyroclastic flows can reach extremely high speeds.

This is Guatemala’s deadliest such event since 1902, when an eruption of the Santa Maria volcano killed thousands of people.