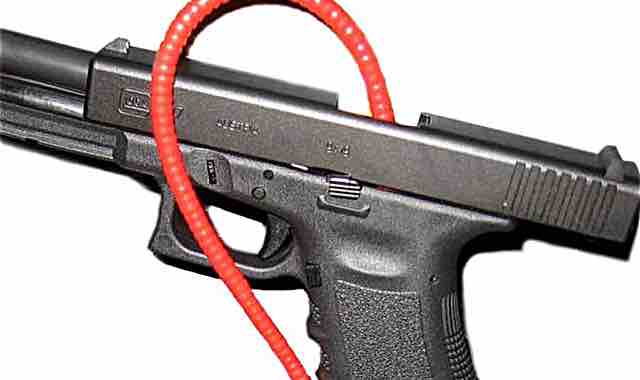 Basseterre, St. Kitts, 13th February 13, 2018 (MyVueNews.com) – One of the main efforts of law enforcement agencies in St. Kitts & Nevis today has been the removal of illegal firearms and ammunition from the streets of the country and away from criminal elements.

The most recent effort in this regard was recorded on Monday, 12th February, 2018, when officers at the Robert Bradshaw International Airport seized a quantity of agricultural substances and weapons discovered in a package.

A release from the police shared on Tuesday, explained that “Officers of Her Majesty’s Customs and Excise Department discovered two (2) firearms on Monday (February 12) along with a large quantity of compressed vegetable material suspected to be Cannabis inside a package at the Robert L. Bradshaw (R.L.B.) International Airport.”

They said, “The package had arrived via a courier service. The firearms, one (1) Glock 34 pistol with one empty magazine and one Smith & Wesson .38, along with the vegetable material, which weighed about 500 grams (about 1 pound), were handed over to the police.”

Police, however, did not say if anyone has been held accountable, or if an arrest is imminent.

But they did remind that increasing the number of firearms taken off the streets is one of several goals they have established for themselves.

They added that this would also include preventing firearms from getting into the hands of those who try to smuggle them into the country.

The Police say they are also committed to removing drugs from our communities. However, meeting these goals would not be possible without strategic partnerships, they admitted.

The Police intend to meet these goals by collaborating with other agencies, which is one of six crucial areas that were identified to guide their efforts.

They identified the Customs and Excise Department as one such agency.  Its preventative role in the overall crime-fighting effort is significant, said the police statement.

In addition to this find, Customs Officers, last month, were also able to detect a large quantity of drugs inside a water heater that entered through one of the ports on St. Kitts.

The first firearm for the year was discovered by SCASPA Security Personnel inside the bag of a U.S. national who was preparing to leave the country via the R.L.B. International Airport.

These finds, along with the firearm found by Police Officers last month, brings the total number of firearms seized for the year so far to three (3).