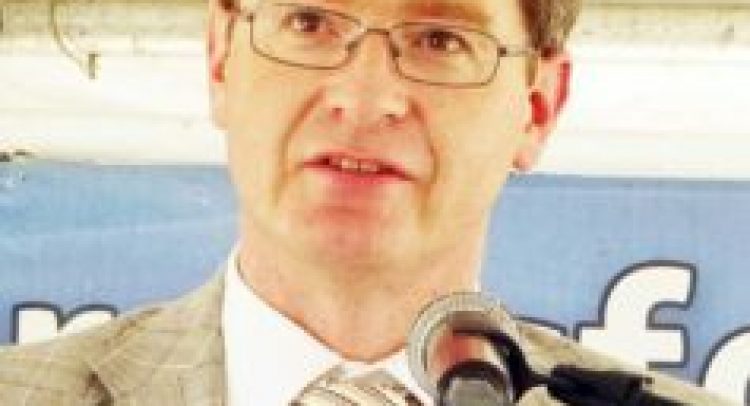 As member of Commonwealth

On the occasion of Guyana’s 54th Independence anniversary, British High Commissioner to Guyana, Gregory Quinn has reminded his host country of how important it is to adhere to democratic principles as a member of the Commonwealth.

In expressing best wishes to Guyana on Tuesday in a video broadcast, Quinn acknowledged the changes to the country since independence in 1966. In fact, he noted that there have been changes since he arrived in 2015.

“But the fundamental principles it is guided by, good governance, democracy and the rule of law, remains the same. As you would expect from a member of the Commonwealth, a membership we share,” Quinn said.

Quinn went on to urge whoever is declared the winner of the elections held almost three months ago, to govern in the interest of the people and implement, among other things, much-needed reforms.

“Whomever takes charge will have to rule for the benefit of every Guyanese citizen. Undertaking whatever constitutional reforms are necessary to ensure that happens.”

“I look forward to seeing Guyana continue down its path of development. Development which should [include] each and every citizen, as it should,” he added.

Guyana, a member of the Commonwealth, the Caribbean Community (Caricom) and the Organisation of American States (OAS), has seen its international standing shaken in the past few months.

This is because of the Guyana Elections Commission’s (GECOM) handling of the vote tabulation, after the March 2 General and Regional Elections.

It has been so controversial that at one point, Quinn, and his European Union (EU), United States and Canadian counterparts were forced to walk out of the tabulation at the Region Four Returning Office.

At the heart of these controversies is Region Four Returning Officer, Clairmont Mingo, with several stakeholders making it clear prior to the recount underway at the Arthur Chung Conference Centre that he must play no further role in the process.

After the General and Regional Elections were held on March 2, 2020, the tabulation process went relatively smoothly for all the regions. That is until the process started in Region Four (Demerara-Mahaica), the most populated region in the country.

Strange things began happening as the tabulation got underway at the Returning Office at Ashmins building, High Street, Georgetown, with RO Mingo complaining of feeling unwell and being rushed to the hospital, his deputy staff refusing to continue the tabulation for various reasons, a GECOM staff being whisked away by Police after surreptitiously going into a room with a flash drive and computer and eventually, the count being suspended.

Mingo then returned, with a piece of paper and declared results over the objections of all the party agents present. That declaration was subsequently declared unlawful by the High Court, but Mingo would return to make another controversial declaration, this time at GECOM’s office in Kingston.

Prior to his second declaration, agents at the GECOM office complained of being impeded from observing the counting process. Mingo’s refusal to show agents the original Statements of Poll (SoPs) is reported to have hampered the transparency of the process.

He then made his declaration and was whisked away under Police protection. Both of these declarations differed in number and were reportedly not tabulated from the official SoPs and have been rejected by everyone except A Partnership for National Unity/Alliance For Change (APNU/AFC).