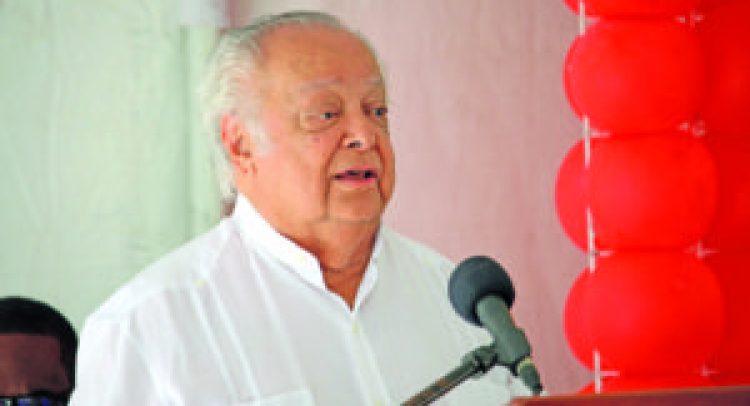 Distinguished Guyanese-born diplomat Sir Shridath Ramphal has hailed the Guyana Elections Commission’s (GECOM’s) decision to declare a winner of the 2020 elections, noting that this decision paves the way for Guyana to set a positive example for the region and the world.

Ramphal made this pronouncement in a statement on Wednesday, wherein he applauded GECOM Chair, retired Justice Claudette Singh, for taking a stand against what Barbados Prime Minister Mia Mottley once described as “dark forces.”

It was Singh who directed Chief Elections Officer (CEO) Keith Lowenfield to prepare a final report by today, so that the election results can be declared. According to Ramphal, with this decision, Justice Singh has elevated the rule of law above all other considerations.

“As one who pleaded that we, Guyanese, ‘do not descend into the pit of lawlessness’, I applaud the Chairman of GECOM, Claudette Singh, for elevating the rule of law above all other considerations,” Ramphal said in his statement.

Ramphal, a former Commonwealth Secretary General and Foreign Affairs Minister of Guyana, also described the Caribbean Community report on the recount as a landmark in democratic ethics throughout Caricom. In the report, Caricom had found that the elections were credible, and while there were some issues, none was so serious as to necessitate the annulment of the elections.

“The Caricom Report on the recount of the votes in the March 2nd general elections is more than a milestone in democracy in Guyana; it is a landmark in democratic ethics throughout Caricom,” Ramphal said.

Ramphal recalled incumbent President David Granger’s own words, that Caricom was the most legitimate interlocutor for Guyana’s elections. He noted that Guyana, a member of Caricom, is among the member states that pledged to uphold democracy, and with the collective eyes of the regional and international communities turned on Guyana, the outcome of Guyana’s election must stand as an example to the region and the world.

The diplomat added that the Caricom scrutineers have gilded that pledge, and the Chairman of GECOM, in respecting the legalities their report ordained, “has married law to democracy. The outcome of the Guyana General Election 2020 must be an example — not only in Guyana, but regionally and world-wide – of the strength of law and democracy.”

Declaration
In a landmark decision, retired Justice Claudette Singh on Tuesday decided to use the results of the recently concluded national election recount to have the People’s Progressive Party/Civic (PPP/c) declared the winner of the 2020 General and Regional Elections.

This decision was made on Tuesday afternoon, after a day of meetings between Singh and the six GECOM commissioners. At one point during the Commission’s deliberations, APNU/AFC appointed Commissioners Vincent Alexander, Charles Corbin and Desmond Trotman had made a last-ditch attempt to have the entire elections scrapped. However, this was defeated.

In her decision, Singh had said that GECOM does not have the power to interrogate witnesses and determine the credibility of an election. This, according to her, is for the High Court and an election petition.

Similarly, Singh noted that GECOM is not empowered to annul an election under any law. This is something that APNU/AFC-nominated GECOM Commissioners had asked for in a motion moved before the Commission on Tuesday morning, and which was ultimately defeated.