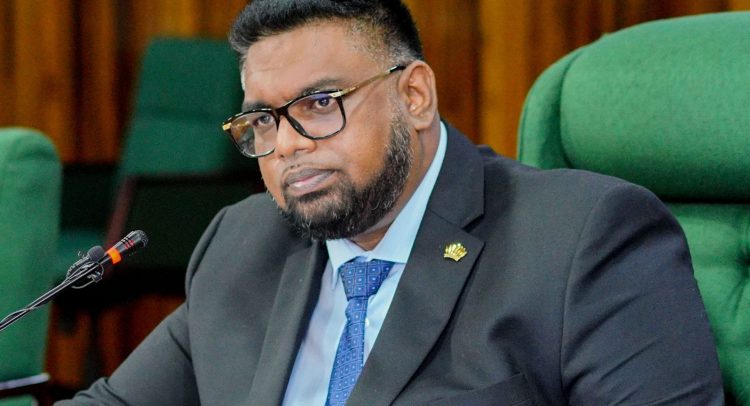 President Dr Irfaan Ali on Thursday talked up the availability of massive investment opportunities in Guyana for investors worldwide, while noting that the country is poised to become the most exciting investment destination in the region.

Guyana is on the move. We are accelerating development…
My message to you today, therefore, is that Guyana is ready to do business. Guyana will become the investment capital of the region. We assure you that when you come here, you will not want to leave. I invite all of you therefore to explore the business opportunities which abound in Guyana,” President Ali expressed to a number of potential investors.

As described by the President’s Office in a press statement, the conference is an “outstanding platform from which to advance our shared goals for promoting economic growth, the rule of law, and closer cooperation throughout the hemisphere”.

The Head of State explained that Guyana is a prime destination for investors in a variety of sectors, including oil and gas and energy, agriculture, forestry, mining, information and communication technology (ICT), tourism, housing, and manufacturing and services.

Petroleum Industry
On the oil and gas front, he pointed out that the country is projected to produce oil for well beyond 30 years.

The President emphasised that despite the growth in the oil sector, the country will not “hitch all of its wagons on oil”, but rather use the resources derived from the sector to revive the traditional economic sectors, thereby ensuring a more diversified and resilient economy.

“Guyana is rich also in timber, gold, diamond, bauxite, manganese, sugar, tourism. Its agricultural potential is phenomenal. It is believed to possess rare and precious minerals and other potential bonanza,” he highlighted.

Energy Sector
Further, the President revealed that Government is seeking investors to develop a mix of energy projects in order to generate an additional 400-megawatts of installed capacity.

“We shall be installing a natural gas plant (and) pursuing hinterland electrification, including through the provision of mini-grids for large hinterland communities,” President Ali disclosed.

He added that “the Amaila Falls Hydro-Electric Project will recommence”.

“Guyana intends to realise its dream of becoming the breadbasket of the Caribbean,” he expressed.

“We’ve already commenced discussions with various stakeholders in the Middle East in developing our Halaal industry standards, so that we can benefit from that large market through investments and new market opportunity,” he explained.

“To do this, we have to modernise our agriculture, we have to expand into mega-farms, and we have to create a motivating environment in which large scale investors in agriculture would see Guyana as a destination of great prospect and opportunity,” the President added.

Connectivity and Market Access
As he laid out Government’s plan for the next five years, President Ali told the conference of international private sectors that the country’s location as well as trade and investment agreements boast significant advantages for market access.

He explained that with a number of key infrastructural projects, Guyana will soon be well connected.

“For example, the deep-water port and the road-link is aimed at connecting Brazil with Guyana. And the bridge-link to Suriname [will be] opening up the potential for great and expanded market opportunities,” the Head of State outlined.

Apart from cross-country connectivity, President Ali said, there are a number of transformative infrastructural projects which are already in the pipeline. Those will result in great accessibility across the various regions of the country.

Incentives
Moreover, President Ali explained that the country has an attractive investment regime, which is being refashioned to become more investment-friendly. He called attention to the multitude of measures included in National Emergency Budget 2020, which he said are aimed at improving the ease of doing business, increasing the competitiveness, and reduce investment and production costs.

Several key budget measures, including tax concessions on agro-processing, cold storage and packaging; the removal of VAT on exports, and allowing exporters, including those in the fishing, rice and timber industries, to reclaim input VAT.

Against this backdrop, the President noted the importance of not only public investment, but foreign direct investment (FDI) towards driving growth and accelerating Guyana’s transformative agenda.

“We welcome foreign investment. We are eager to do business with the rest of the world, including with the United States. We are enthusiastic about attracting investment, including through public-private partnerships and through the partnerships between foreign and local companies,” President Ali said.

“Guyana is about to become the investment colossus of the Caribbean. It will become the region’s most exciting investment destination. Now, therefore, is the right time to be doing business in Guyana,” he declared.