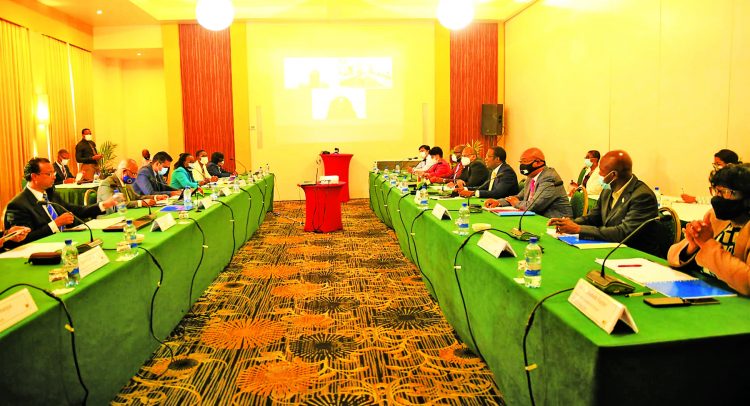 The visiting ministerial delegation from Suriname on Thursday met with local ministers to further iron out the agenda for a ‘Strategic Dialogue and Cooperation Platform’ that will be launched in November.

The meeting will be primarily focused on: creating a framework for collaboration of culture, sports and tourism; the Corentyne River Bridge; improving inter-country agricultural sector; security, and diversification of the economies; and external trade of Guyana and Suriname.

During a briefing prior to the commencement of the meeting, Minister Todd stated that the mandate for further strengthening relations with Suriname was cemented during President Chandrikapersaud Santokie’s visit back in August.

“Our presidents provided the direction, and for new impetus in our cooperation programme as well as for our collaboration on matters of common interest to our countries and the regional agenda, they gave us a very specific mandate. And for our discussions today, we will focus on reviewing the various initiatives under the cooperation programme; proposals for the implementation of these; and other initiatives under the new ‘Strategic Dialogue and Cooperation Platform’ which will launch in Suriname next month,” he noted.

The Foreign Affairs Minister further lauded the progress of at least one of these collaborative initiatives; that is: the Corentyne River Bridge, for which the landing sites have been earmarked.

“I hope that we can sustain momentum, not only on this project, but on all other agreed areas of cooperation,” Minister Todd asserted.

Meanwhile, the Surinamese Foreign Affairs Minister noted that there is much scope for further enhancement of bilateral relations between Guyana and Suriname. As such, he anticipated that they will be able set an agenda for the upcoming ‘Strategic Dialogue and Cooperation Platform’ in Paramaribo, set for November.

President Irfaan Ali will be leading a delegation in November to attend Suriname’s 45th Independence Anniversary celebration. During that visit, the two Heads of State will sign several agreements, including one on the Corentyne River Bridge.