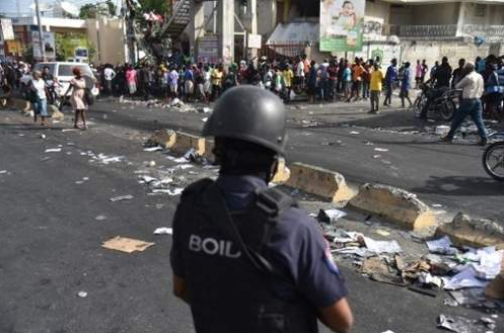 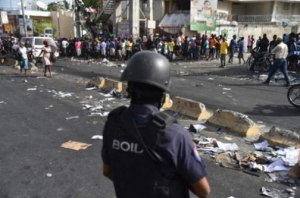 Scenes of anarchy alternated with tentative signs of a return to normal life in Haiti’s capital, with calls for a general strike today after two days of deadly looting and arson triggered by a quickly-aborted government attempt to raise fuel prices.

With the death toll rising to four, protesters in the impoverished Caribbean country called for a two-day general strike, despite the Government’s climb down over the price increases.

Many Haitians are now demanding the immediate departure of President Jovenel Moise.

“If the president stays one more day, the game will take on a new appearance: we will cut off the roads and burn everything, because we have nothing else to lose,” said one masked protestor.

Groups of young men trying to extort money from motorists as well as pedestrians controlled various intersections and roads in Port-au-Prince on Sunday.

Local radio reported that groups of armed people in civilian clothes had been seen in some downtown districts.

In the heart of the capital, AFP journalists saw shops ransacked as protestors demanded Moise’s exit.

Alongside these chaotic and violent scenes, a partial return to normal life occurred in parts of the capital.

After mass, many fruit and vegetable merchants had taken up their places again on the sidewalks, and motorcycle taxis were back at their usual intersections – even if customers were scarce.

Some flights returned, too, with three aircraft landing from the United States after all airlines cancelled service on Saturday.

But uncertainty remained, and the embassies of France and Canada said they would remain closed on Monday.

Moise had urged demonstrators late Saturday to “go home,” saying the price hike suspension had “corrected what had to be corrected.”

His televised speech disappointed much of the population and the political class: “We were expecting another speech, a serene analysis of the situation that has prevailed in the country in the last two days and caused so much loss of life and materials,” lawmaker Jerry Tardieu told AFP.

The unrest followed a government announcement on Friday that gasoline prices would rise by 38 per cent, diesel by 47 per cent and kerosene by 51 per cent starting this weekend.

In suspending the price hikes, Prime Minister Jack Guy Lafontant on Saturday emphasised that “violence and democracy are fundamentally incompatible.”

Even before the fuel price controversy, deputies had already begun a debate on his future, and Saturday’s U-turn could lead to the government’s fall.

On Friday night, the bodyguard of an opposition-party politician died in an altercation with demonstrators in central Port-au-Prince as he attempted to get through a roadblock. His body was then burned in the road.

On Saturday afternoon, an AFP journalist saw a young man who had been shot dead. Two other people have also lost their lives.