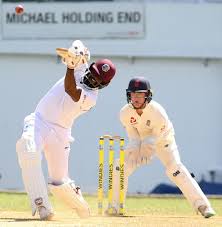 Jahmar Hamilton slammed his sixth first-class hundred, but Raymon Reifer fell agonisingly short of his second, as West Indies A moved into a superior position against England Lions in the second “Test” on Monday.

The diminutive Hamilton struck an even 100 to anchor the middle of the innings before Reifer was the glue that held the bottom half together with a fluent 95, as Windies A were bowled out for 422 about an hour and 10 minutes before the scheduled close on the second day of the match at Sabina Park to gain a 277-run first-innings lead.

They however, had to share the spotlight with left-arm spinner Jack Leach, whose 6-138 from 41.4 overs made him the pick of the English bowlers.

The home team however, failed to make any headway in an hour in the field before stumps were drawn, as the Lions reached 34 without loss in their second innings with their captain Keaton Jennings not out on 11 and fellow opener Haseeb Hameed not out on 18.

Starting the day on 159 for four, the overnight pair of Hamilton and Dowrich batted resolutely through almost the first hour to consolidate the position of West Indies A.

Dowrich, not out on 20 overnight, looked set to follow up his first “Test” hundred with another significant innings before he was caught close to the wicket off Leach with the lead 55.

It was extended however, when Reifer came to the crease and further frustrated the Lions in a stand of 102 with Hamilton either side of lunch.

Hamilton, not out on 17 overnight, reached his hundred from 182 balls with the last of his 17 boundaries in the first hour after lunch, but faced just four more deliveries before he became the only wicket for Toby Roland-Jones after spending 3 ¾ hours in the middle.

Further resistance came when the burly Rahkeem Cornwall came to the wicket and shared 49 for the seven wicket with Reifer, who duly passed his 50.

Cornwall was bowled by Leach for 25 to leave West Indies A 351 for seven, and Jomel Warrican proved not to be the immovable force he was in the first “Test” and was stumped off Leach for seven before tea.

After tea, Reifer continued to keep the score moving with a view to another first-class hundred, but Louis was caught at slip to become the only wicket for Paul Coughlin.

This left Reifer with batting bunny Keon Joseph to partner him in the search for the milestone, but trying to push on, Leach bowled him after a near four-hour stay that included eight fours and two sixes from 179 balls.

West Indies A lead the three-match series 1-0, after winning the first “Test” which ended last Sunday by two wickets at the Trelawny Multipurpose Complex on the Jamaica north coast.

Tummy bloating can be ovarian cancer