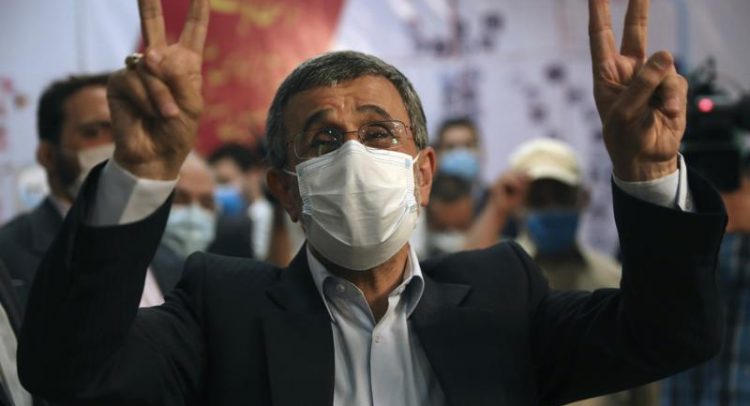 By NASSER KARIMI and JON GAMBRELL

Ahmadinejad’s attempt to run again in 2017 disregarded the words of Iran’s Supreme Leader Ayatollah Ali Khamenei, who had warned the firebrand, Holocaust-questioning politician his standing for office would be a “polarized situation” that would be “harmful for the county.”

This time, however, Khamenei seemingly isn’t directly challenging the candidacy of the 64-year-old former Tehran mayor, who joins a wide-open election to replace the relatively moderate President Hassan Rouhani. A council Khamenei oversees ultimately will determine if Ahmadinejad and other hopefuls can run in the June 18 poll.

As Iran negotiates with world powers over its tattered nuclear deal amid tensions with the U.S., the entry of Ahmadinejad could enliven an election that Iranians so far appear unenthusiastic about during the coronavirus pandemic and crushing sanctions.

Thronged by shouting supporters, Ahmadinejad marched to a registration center at the Interior Ministry, where he filled out registration forms. He held up his hands in a “V for Victory” salute before addressing reporters.

“My presence today for registration was based on demand by millions for my participation in the election,” he said, adding that the move also came after “considering the situation of the country, and the necessity for a revolution in the management of the country.”

Ahmadinejad previously served two four-year terms from 2005 to 2013. Under Iranian law, he became eligible to run again after four years out of office, but he remains a polarizing figure, even among fellow hard-liners. His disputed re-election in 2009 sparked massive “Green Movement” protests and a sweeping crackdown in which thousands of people were detained and dozens were killed.

Abroad, he became a caricature of Western perceptions of the Islamic Republic’s worst attributes, such as questioning the Holocaust, insisting Iran had no gay or lesbian citizens and hinting Iran could build a nuclear weapon if it chose to do so.

But Ahmadinejad remains popular among the poor for his populist efforts and home-building programs. Since leaving office, he’s raised his profile via a social media presence and written widely publicized letters to world leaders. He’s also criticized government corruption, though his own administration faced graft allegations and two of his former vice presidents were jailed.

Unlike 2017, however, Khamenei hasn’t warned Ahmadinejad off the campaign and is even signaling he’ll remain silent about his opinions.

“In past elections, those who wanted to become a candidate came and asked me ‘Do you agree?’” Khamenei said in a video-conference speech Tuesday night to Iranian university students. “This year I said I won’t even say that.”

Iran opened registration for the presidential election on Tuesday, kicking off the race as uncertainty looms over Tehran’s tattered nuclear deal with world powers and tensions remain high with the West. It will run through Saturday.

Also registering Wednesday was Rostam Ghasemi, who served as oil minister under Ahmadinejad and as a general in Iran’s paramilitary Revolutionary Guard. Hard-liners have increasingly suggested a former military commander should be president given the country’s problems, something that hasn’t happened since Iran’s 1979 Islamic Revolution and the purge of the armed forces that followed.

“A large portion of the people have gotten below the poverty line. I think mottos like ‘it can be done’ or ‘it must be done’ belong to the past,” Ghasemi told journalists. “God willing, with the experience gained from the past, the people will not give the helm of the country to people that haven’t even navigated a boat before.”

Within Iran, candidates exist on a political spectrum that broadly includes hard-liners who want to expand Iran’s nuclear program and confront the world, moderates who hold onto the status quo and reformists who want to change the theocracy from within.

Those calling for radical change find themselves blocked from even running for office by the Guardian Council, a 12-member panel that vets and approves candidates under Khamenei’s watch.

Among the reformists, however, a clear candidate has yet to emerge. Some have mentioned Foreign Minister Mohammad Javad Zarif, though he now finds himself embroiled in a scandal over a leaked recording in which he offered frank criticism of the Guard and the limits of the civilian government’s power.

“In my loneliness, I thought and calculated my shortcomings, both domestic and foreign, in a difficult and tense situation,” he wrote. I “finally concluded in good conscience that my participation does not agree with the virtuousness and expedience of the nation and the country.”

Former President Mahmoud Ahmadinejad flashes victory sign while registering his name as a candidate for the June 18, presidential elections at elections headquarters of the Interior Ministry in Tehran, Iran, Wednesday, May 12, 2021. The country’s former firebrand president will run again for office in upcoming elections in June. The Holocaust-denying Ahmadinejad has previously been banned from running for the presidency by Supreme Leader Ayatollah Ali Khamenei in 2017, although then, he registered anyway. (AP Photo/Vahid Salemi)