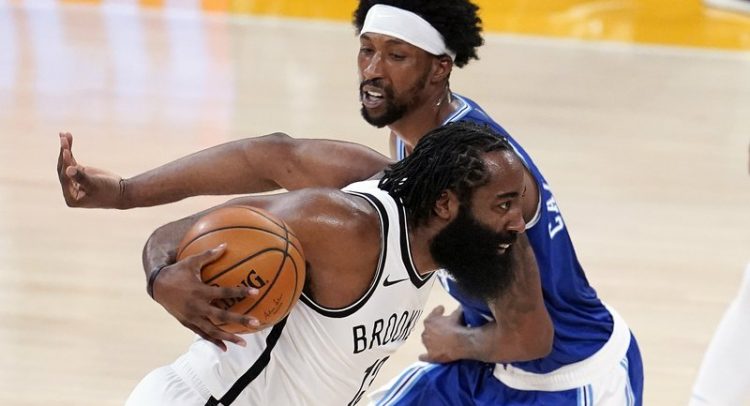 Kyrie Irving had 16 points and seven rebounds as Brooklyn easily won this matchup of NBA title contenders and improved to 4-0 on a five-game West Coast road trip even without Kevin Durant, who missed his third straight game with a strained left hamstring.

“I don’t think we’re getting too carried away,” Brooklyn coach Steve Nash said. “We played a solid game and got a good win on the road, but it’s early and we’ve got a lot of growing to do. We have to take the opportunity to get better regardless of the results, but it also feels sweet when you go out West and win some games.”

The Nets knew this statement win had an asterisk: Anthony Davis and Dennis Schröder sat out for Los Angeles, leaving the defending champions without two of their top three scorers.

“We’ll see them down the road again with a whole entire healthy Lakers team,” Irving said. “That’s what we wanted, and we expect that.”

LeBron James scored his 35,000th career point while getting 32 points, eight rebounds and seven assists for the Lakers. Kyle Kuzma added 16 points and 10 rebounds for Los Angeles, which lost for only the second time in 10 games.

“Missing AD and then our starting point guard in Dennis, it’s a big blow for us,” James said. “But they’re missing key players as well. Neither team was full strength. We just didn’t play up to our capabilities tonight. Give them credit.”

Davis missed his second straight game after aggravating his strained right calf last weekend, and Schröder was a late scratch under the NBA’s health and safety protocols.

“Obviously AD is an MVP-caliber player, and then Dennis, he’s our engine,” Lakers guard Quinn Cook said. “He makes everything go with his pace and his defense. Guys have to step up, but to lose him right before tipoff, it’s something we definitely haven’t dealt with all season.”

Timothé Luwawu-Cabarrot scored 15 points and hit five of the 18 3-pointers by the Nets, who pulled away comfortably in the second half. Brooklyn also showed off its recently improved defense, limiting the Lakers’ good looks all night.

“It’s about time we turned the corner defensively,” Irving said. “No team is going to win anything in this league if they don’t get stops. We heard (Nash) loud and clear the last few games. It’s one of our points of emphasis.”

Nets: DeAndre Jordan had seven points and eight rebounds in the longtime Clippers center’s latest return to Staples Center. … Brooklyn improved to 10-1 against teams above .500.

Lakers: Kentavious Caldwell-Pope scored nine points on his 28th birthday. … Lakers coach Frank Vogel said Davis will be sidelined for four weeks, stretching into the second half of the season. Los Angeles intends to be conservative with the All-NBA big man, allowing him to return to full strength before he plays again.

James received his 17th consecutive All-Star invitation earlier in the day and was named a captain for the game, along with Durant.

Along with their longest overall winning streak in two years, the Nets have won four straight road games for the first time since December 2008. They’ve also got seven straight wins over Western Conference opponents for their longest streak since November 2006.