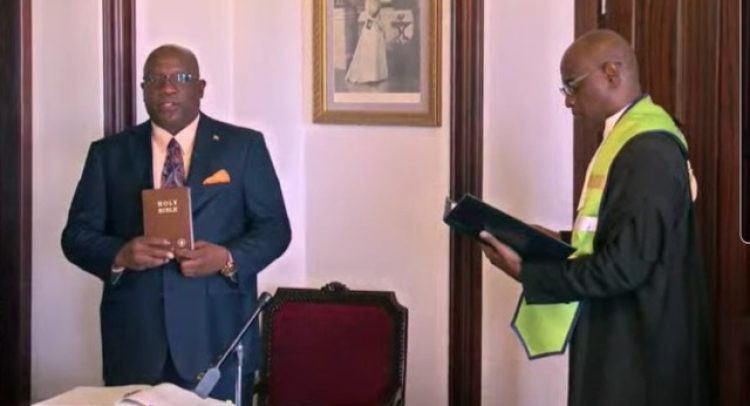 Harris sworn in for second term as Prime Minister

He took the oath in the presence of Deputy Prime Minister elect, Shawn Richards.

Also present were the Ambassador from Taiwan and the Secretary of the Cabinet of the St. Kitts and Nevis Government.

This is the second time that Harris is taking the Prime Minister’s oath.

While welcoming those present and others viewing and listening the ceremony via the media, the Governor General explained the importance of the occasion.

“We are gathered today to witness a very significant ceremony, which involves the administering of the oaths of office to the new Prime Minister, consequent upon the General Elections of Friday, 5th June, 2020.”

The various oaths administered were for Allegiance, Oath of Office and Oath of Secrecy.

Following the oaths, the newly sworn in PM gave a few remarks, expressing thanks and appreciation to those responsible for his re-election.

He also had words of praise for his colleagues within his coalition, who won their seats and the two who were not successful.

On the question of the traditional public holiday, following an election, Harris admitted that his new government had not made a decision on that matter, but would soon do so.

The ceremony was held at Government House, Springfield.

Main photo: Timothy Harris being sworn in as Prime minister for a second term. June 7th at Government House