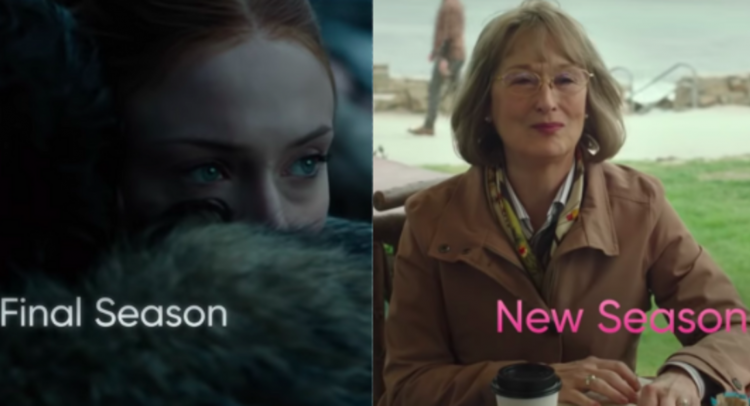 If the “Sharp Objects” finale (and thatmid-credits sequence) didn’t keep you up all night, then surely the first look at new seasons of “Game of Thrones” and “Big Little Lies” screwed with your sleep cycle.

HBO was working overtime on Sunday night when the network released a sizzle reel of their new slate of programming, including the highly anticipated final season of the fantasy drama, which is set to bow in the first half of 2019.

New “GoT” footage is dragon egg-level precious, so the trailer interspersed scenes from previous seasons with at least one shot we’ve never seen before. In a blink-and-you-almost-missed-it moment, Jon Snow (Kit Harington) embraces Sansa Stark (Sophie Turner) back home in Winterfell, according to Entertainment Weekly.

Also on deck for 2019, is the second season of a show that really didn’t need one ― *cough* “Big Little Lies” *cough* ― but who are we to not welcome anything Meryl Streep-related into our lives.

The Oscar winner heads to Monterey as the mother of Alexander Skarsgård’s character, who (spoiler alert!) met his maker in the finale thanks to a push down the stairs, and gives an all-knowing glance in the trailer.

And if you needed any more reason to try to hack your upstairs neighbor’s HBO account, let sneak peeks at the Jennifer Garner-fronted comedy series “Camping,” the new season of “True Detective” and “The Deuce” push you over the edge.