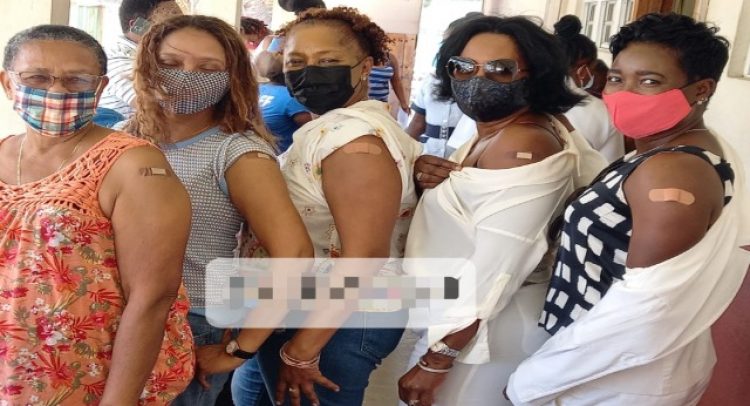 When the program began on Monday, 22nd February, 2021, 50 persons received their first shots of the Oxford AstraZenica Vaccine.

Given the small supplies then, the initiative began with only a small group of essential workers and top government officials being inoculated.

However, once the government received its own direct supplies of 20,000 doses from India, on Monday, 1st March, the protocols were immediately changed, opening the opportunities to all nationals, no matter their priority areas of COVID-19 work.

This has transformed the program and as of Wednesday, 3rd March, the Chief Medical Officer, Dr. Hazel Laws reported that some 2,085 persons had been given their first dose. Laws explained that these individuals are to receive a second jab in 10 weeks time.

Laws revealed that on Wednesday 3rd March alone, 729 persons stepped forward to be counted in the long journey to 70% herd immunity. In the first week of the launch the vaccine made its way into the arms of 1,356 persons.

Hundreds have been publicly displaying their arms and even video-taping the process when being injected. They have used the occasion to encourage others, (family members, neighbours, co-workers and friends), to be counted in the push to fight COVID-19 through the program of vaccination.

Health centers on both Nevis and St. Kitts have been made available for citizens and residents to be vaccinated and appointments, as was previously required, are no longer necessary. Just show up, from 1:00 pm, and you should be able to get vaccinated, said the CMO.

Strangely, while being vaccinated, for anything, has always been dreaded undertaking for most, Kittitians and Nevisians seem to have happily embraced their responsibility to be vaccinated, hopefully protecting themselves, family and other nationals and residents, from the spread of the virus which has already accounted for over 2.5 million deaths worldwide, but thankfully, no deaths, no hospitalizations of serious note, and no community spread in St. Kitts & Nevis.

However, the country has not escaped the virus, and in the past 12 months, 41 persons (all imported), had been confirmed as having contracted the COVID-19. But only 2 remain active, with all others recovered.

This positive record by the people of St. Kitts & Nevis, health officials and their government, has not relaxed the efforts to remain vigilant to protect lives.

The CMO said that within only 9 days, St. Kitts & Nevis, with a population of around 54,000, inoculated approximately 6% of its target audience of persons between the ages of 18-80.

Anyone over the age of 80 has been advised to consult their doctor before considering their availability to be vaccinated.

While Dr. Laws noted and praised citizens for making an informed decision, she also advised that those experiencing a cold, respiratory track infections and  fever, should postpone taking the vaccine. The same holds for those women who are pregnant or breastfeeding.

Those with allergies should also consider delaying the process and ought to consult their physicians.

The first case of COVID-19 was confirmed in the country in March, 2020.