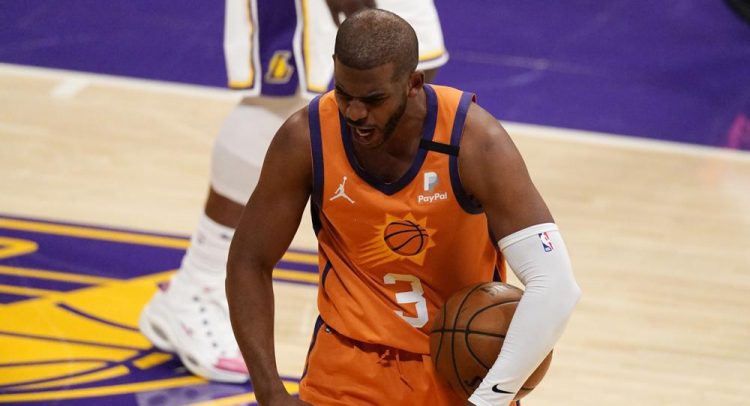 PHOENIX (AP) — Chris Paul is feeling better and looking much more like the “Point God” that’s helped make the Suns one of the NBA’s best teams this season.

Anthony Davis is hurting and it’s unclear if the Lakers star forward will be available for a crucial Game 5 on Tuesday night in Phoenix.

The Suns-Lakers series has lived up to the hype as one of the most intriguing matchups of the first round of the NBA playoffs. But instead of focusing on the stars on the floor, the chess match between Suns coach Monty Williams and Lakers coach Frank Vogel is having a bigger impact than expected.

“It’s a roller coaster,” Williams said. “When you’re in the playoffs, and you have time in between games, you can’t even imagine the thought processes that go into what your rotation is going to be like, how it’s going to affect the team, making the right decision on who to fill those minutes for that particular player. There’s a lot that goes on.

Coming into the series, the Suns were relying on an All-Star backcourt of Paul and Devin Booker while the Lakers countered with All-Stars LeBron James and Davis.

But Paul hurt his shoulder in Game 1 and was obviously limited for the next two games. Only on Sunday in Game 4 did the 36-year-old start to look like himself, scoring 18 points and dishing nine assists in an 100-92 win in LA. Other Suns players — like Cameron Payne and Deandre Ayton — have had to step up.

For the Lakers, Davis didn’t return in the second half because of a left groin strain. If he can’t go in Game 5, it will be up to others like Kyle Kuzma, Andre Drummond and Marc Gasol to pick up the slack.

Of course, there’s always the chance that LeBron could just will the Lakers to victory, as he’s done so many times in his career.

The Trail Blazers and Nuggets also have a crucial Game 5 on Tuesday in Denver.

It was the outside shooting of Norman Powell, not Damian Lillard, that led the way to Portland’s 115-95 victory over Denver in Game 4. Powell, a shooting guard/small forward the Blazers acquired in a March trade with Toronto, erupted for 29 points to send the series back to the Mile High City tied.

“I thought we had some guys that were tentative, that looked a little scared and that we played soft,” Malone said after the game. “Maybe this will be a wake-up call for our starting group. Good things happen when you play hard.”

— NEED TO KNOW: The series has been seriously altered by injuries to Paul (shoulder) and Davis (groin), and both teams have had to adjust lineups and strategies accordingly. Paul looks like he’s getting close to full health — he had 18 points and nine assists in Game 4 — while it remains to be seen if Davis is available for Game 5.

— KEEP AN EYE ON: Ayton has played some of the best basketball of his young career during this series. The No. 1 overall draft pick in 2018 is averaging 19.8 points and 13.5 rebounds per game while anchoring a Suns defense that’s held its own against a much bigger Lakers team.

— INJURY WATCH: All eyes are on Davis. If he plays, it might not be at 100%. If he doesn’t play, James and the supporting cast will have to pick up the slack.

— PRESSURE IS ON: Lakers. The Suns reclaimed home-court advantage after beating the Lakers 100-92 on Sunday in Los Angeles. If Phoenix can win its final two home games of the series, it’ll move on to the second round.

— NEED TO KNOW: The Trail Blazers seized the series momentum in Game 4 with a dominant 115-95 win. The most surprising part was that Portland got just 10 points from star guard Damian Lillard, who shot 1 of 10 from the field. Malone wasn’t happy with his team’s effort in the aftermath, saying some of his guys “played soft.”

— KEEP AN EYE ON: Powell. He was fantastic in Game 4, scoring 29 points on 11-of-15 shooting. When the Trail Blazers get plenty of help for star guards Lillard and CJ McCollum, they’re a tough team to beat.

— INJURY WATCH: The Nuggets continue to work through life without G Jamal Murray, who hurt his knee and was lost for the year late in the regular season. Denver has received solid production from backup Facundo Campazzo, who is averaging 10.8 points and 6.5 assists in the series.

— PRESSURE IS ON: It’s pretty even, but the Nuggets are coming off a loss and need to regain momentum at home.

— NEED TO KNOW: The Nets’ Big Three of Kevin Durant, James Harden and Kyrie Irving looks like it’s rounding into form at the right time. Durant is averaging 34.8 points, Harden is scoring 26.3 points and dishing 10.8 assists while Irving is adding 24.8 points. If they stay healthy and keep playing like that, they’ll be a tough out for the Celtics or anyone else in these playoffs.

— KEEP AN EYE ON: Celtics F Jayson Tatum. Probably the only way this series is extended is if Tatum goes nuts, like he did in a Game 3 win with 50 points. Even if he plays well, there are no guarantees. He scored 40 on Sunday in Game 4 and the Celtics still lost by 15.

— PRESSURE IS ON: Celtics. They’ve got a find a way to slow down Brooklyn’s offense after it dumped 141 points on them in Game 4.

Phoenix Suns guard Chris Paul celebrates after forcing a turnover during the second half in Game 4 of an NBA basketball first-round playoff series against the Los Angeles Lakers Sunday, May 30, 2021, in Los Angeles. (AP Photo/Mark J. Terrill)