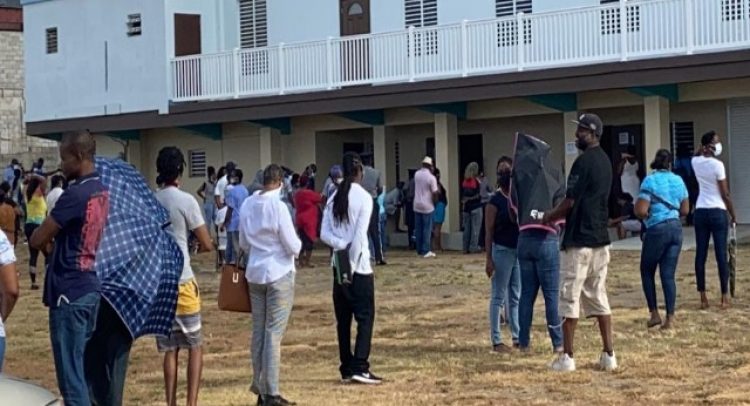 Basseterre, Friday, 5th June, 2020, (MyVue News.com)- Thousands across St. Kitts and Nevis were up very early this morning to head to the polls to cast their ballots in one of the most competitive elections in decades.

The incumbent coalition that calls itself Team Unity is seeking a second term after they defeated the Labour Party in 2015, after a 20 year hold on power.

Though polls were opened from 7:00am, hundreds were already in line before 6:00am, and in some cases, before some poll workers arrived.

The lines have been long and the wait has been even worse, as this time around, voters have to obey social distancing guidelines because of the COVID-19.

The start of polling day is usually hectic and filled with hiccups, but today has seen more than it’s usual problems.

From no hand sanitizers at the start to other issues that caused a few stations to begin operations later than scheduled.

Police too have been out in their numbers and while their assistance to help keep the peace and some semblance of order has been admirable, in a few instances they have added to the frustration of some voters, especially the elderly and those with physical challenges.

This though, was not widespread, nor was it in large numbers, but enough to attract attention and a thought that special treatment ought to be given to these citizens.

The Supervisor of Elections, Elvin Bailey, in one of his recent broadcasts had indicated that this time around, one extra Poll Clerk was being added to specifically help the elderly and those indifferently abled, to ease their burdens, especially with the social distancing protocols that led to longer lines and longer waiting time.

Generally, the atmosphere is calm and a brief morning shower just after 8:30am helped to cool tensions but also sent voters scampering for shelter.

There are 23 candidates vying for the 11 seats up for grabs in the National Assembly.

Photo: A crowd of voters lined up at Antioch Baptist Church

Register of Voters and Polling Divisions