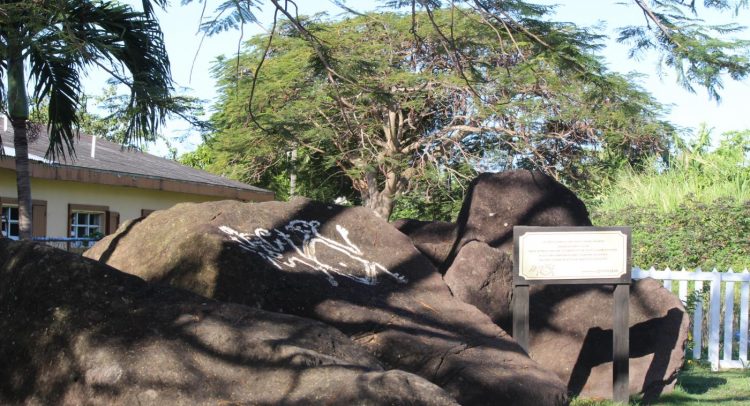 Minute details of the millennia-old Stone Fort Petroglyphs have been captured in 3-D images using a process called photogrammetry. The images are created from multiple photographs.

“All that’s required to create them are high resolution photographs taken from different angles, 20 to 30 photographs per model,” said Glasgow Caledonian University lecturer Edie Horn, who visited St. Kitts this summer as a guest of the National Trust.

The Stone Fort ravine is the site of the 17th century Blood River Massacre and home to some of Petroglyphs in the English-speaking Caribbean. The river and the ravine are believed to have had religious significance to the kalinago people who inhabited the island when the British arrived in the 1620s.

A survey at the end of the century identified 115 petroglyphs on the walls of Stone Fort Canyon, some of which have been damaged by modern-day painters.

Even as the National Trust explores measures to protect the ravine and its fragile ancient art, it is cognizant of the need to document the site in as much detail as possible.

“I think this will provide a fairly good solution for preserving a digital archive of the cravings,” Mr. Horn explained.

While on the island to scan the Berkley Memorial in Basseterre for another project, Horn and fellow GCU lecturer Stevie Anderson offered to scan one of the heritage sites vested in the National Trust.  The age, size and vulnerability of the Stone Fort Petroglyphs made them a prime candidate for the kind detailed imaging documentation provided by photogrammetry.

“This process provides good results without the need for expensive laser scanning equipment. Obviously this process could be used on other sites/artefacts in the future,” Mr Horn said.

The Stone Fort Petroglyphs are susceptible to damage by both nature and human activity. Besides the painters, the sandstone is subject to erosion from the elements.

Historians theorize that the carvings were made during the Saladoid period, which lasted roughly from 545 B.C. to 545 A.D.