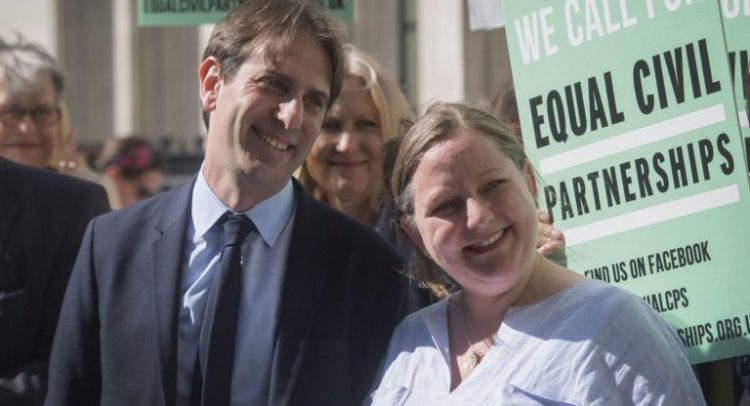 A heterosexual couple have won a legal bid at the UK’s highest court for the right to have a civil partnership instead of marriage.

Rebecca Steinfeld, 37, and Charles Keidan, 41, had been prevented from having the legal union because the Civil Partnership Act 2004 says only same-sex couples are eligible.

The couple, who have two young daughters, claim the government’s position was “incompatible with equality law” and the Supreme Court in London has now ruled they are being discriminated against.

The academics, from Hammersmith in west London, have “deep-rooted and genuine ideological objections to marriage” and were “not alone” in their views, according to their lawyer.

Barrister Karon Monaghan QC said matrimony was “historically heteronormative and patriarchal” and the couple’s objections were “not frivolous”.

Since March 2014, same-sex couples can choose whether to enter a civil partnership or to marry.

But this has not been possible for different sex couples which led Ms Steinfeld and Mr Keidan to claim the law was discriminatory.

On Wednesday, five justices at the Supreme Court, who heard the couple’s case in May, ruled the ban was “incompatible” with human rights laws.

Outside court, Ms Steinfeld told reporters: “Today we are a step closer to opening civil partnerships to all, a measure that would be fair, popular and good for families and children across the country.

“We are elated. But to get this far we have had to go toe-to-toe with the government over four long years.”

Mr Keidan said there was now only one option – “to extend civil partnerships to all”.

He said it was hoped the Government will “act with urgency” for the sake of thousands of couples.

Announcing the court’s decision, Lord Kerr said the government “does not seek to justify the difference in treatment between same sex and different sex couples”.

He added: “To the contrary, it accepts that the difference cannot be justified.”

Lord Kerr said what was sought by the government was “tolerance of the discrimination while it sorts out how to deal with it”.

He concluded: “That cannot be characterised as a legitimate aim.”

In the court’s written ruling, Lord Kerr said it was “salutary to recall that a declaration of incompatibility does not oblige the government or Parliament to anything”.

The decision overturns a previous ruling at the Court of Appeal last February.

Nuclear technology being used to treat diseases in the Caribbean