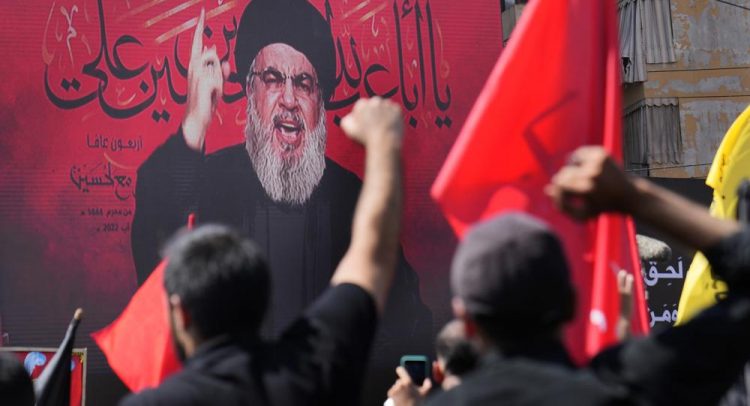 BEIRUT (AP) — The leader of Lebanon’s militant Hezbollah group issued a warning Tuesday to archenemy Israel over the two countries’ maritime border dispute, saying that “any arm” that reaches to steal Lebanon’s wealth “will be cut off.”

Hassan Nasrallah’s remarks came amid intensified U.S. efforts to resolve a more than a decade-old maritime border dispute between Israel and Lebanon, which have officially been at war since Israel’s creation in 1948.

Both countries claim some 860 square kilometers (330 square miles) of the Mediterranean Sea. Lebanon also claims that the Karish gas field is in disputed territory under ongoing maritime border negotiations while Israel says it lies within its internationally recognized economic waters.

Amos Hochstein, a senior adviser for energy security at the U.S. State Department who has been mediating in the dispute, met with top Lebanese officials last week. After the talks, he said the two countries are getting closer to reaching a deal in the dispute.

Hochstein was later reported to have visited Israel and is expected back in Beirut in the coming weeks with Israeli responses to Lebanese requests.

Israel and Hezbollah are bitter enemies that fought a monthlong war in the summer of 2006. Israel considers the Iran-backed Shiite militant group its most serious immediate threat, estimating that Hezbollah has some 150,000 rockets and missiles aimed at Israel.

In his speech during a rally south of Beirut, attended by tens of thousands to mark Ashoura, Nasrallah said Lebanon “should be ready to all possibilities.”

“We will not tolerate the idea that our wealth be stolen,” Nasrallah said.

Ashoura is one of the most important days on the Shiites religious calendar, commemorating the 7th century martyrdom of the Prophet Muhammad’s grandson Hussein.

Lebanon badly needs an agreement over the maritime border in the Mediterranean as it hopes to exploit offshore gas reserves to try and alleviate what has become the worst economic crisis in its modern history.

“Don’t make mistakes with Lebanon nor with the people of Lebanon,” Nasrallah said. “Any arm that tries to reach for any of this (Lebanese) wealth will be cut off.”

Hezbollah leader Sheik Hassan Nasrallah speaks via a video link, as his supporters raise their hands, during the Shiite holy day of Ashoura, in the southern suburb of Beirut, Lebanon, in Beirut, Lebanon, Tuesday, Aug. 9, 2022. The leader of Lebanon’s militant Hezbollah group has issued warning to archenemy Israel over the two countries’ maritime border dispute. (AP Photo/Hussein Malla)