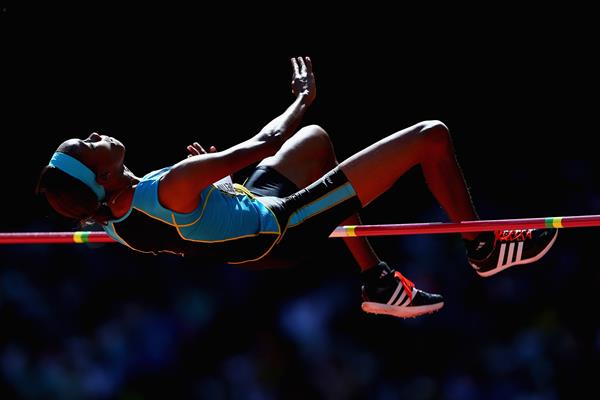 My high moment was winning the Commonwealth Games in Gold Coast earlier this year.

My country had been waiting 56 years to win a Commonwealth gold (in any sport), so to make history, to hear the national anthem and see St Lucia’s flag being raised was very exciting.

The Commonwealths are a big thing in my country and it is always nice to see all the Commonwealth countries come together every four years.

Gold Coast was my fifth Commonwealth Games and at each one I had improved my height. In 2010 I won a bronze medal in New Delhi with 1.88m and then four years later I won bronze again in Glasgow, although this time with 1.92m. I knew if I was to win gold, I would probably have to jump even higher in Gold Coast.

I was confident ahead of the competition. I’d jumped 1.90m or higher seven times in 2018 before Gold Coast. I felt like I was in good shape, I was well prepared and in a positive mind-set, although I always respect all of my opponents as you never know what they can produce on the day.

I was relaxed and focused during the competition. The Australian and British athletes helped push me to jump 1.95m. Without them I wouldn’t have been able to jump such a height.

On winning gold, I thanked the Lord it had finally happened. I had waited so long for this moment. I know many St Lucians had stayed up until the early hours of the morning to watch me. My success was a big thing and I was happy I was able to win for them.

Thankfully I haven’t suffered too many injuries in my career, but one of my low moments came in 2017 when I picked up a calf injury warming up for the Rome Diamond League meet.

The injury was so bad I couldn’t walk, and I was very worried for the rest of my season. I went back to the US for two months and all I did was undergo rehab on the calf tears. To just have treatment and not be able to train or compete was a really low moment for me. The injury was very painful.

I had already qualified for the World Championships (in London) and I decided to compete, despite having done no jumps practise for two months. I didn’t know what to expect after so much time away, but after everything I’d been through the competition went okay. I knew if I was fully fit I could have done better, but to miss the final by just one place (with a best of 1.89m) was not too bad.

Sometimes you just have to deal with injuries, but this one was particularly frustrating because I knew I had a big competition coming up that I couldn’t fully prepare for.