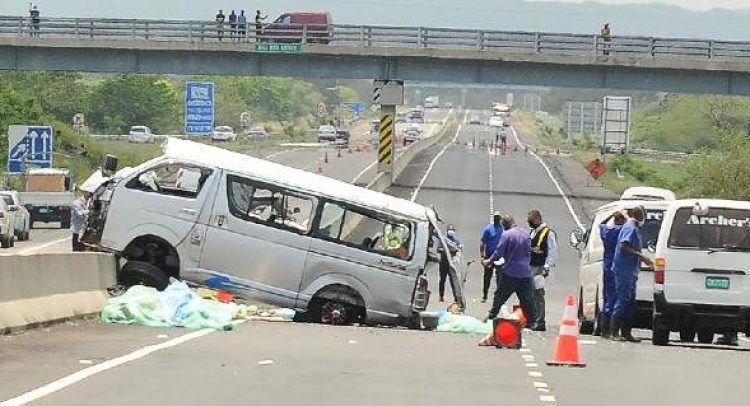 Damian Clarke fought hard to avoid crying yesterday at Spanish Town Hospital in St Catherine as he wondered whether his wife Cornelia was among the passengers of a minibus who had perished in a horrific mid-morning crash on a section of Highway 2000, or was inside the hospital receiving treatment.

Clarke’s grief grew into anger as he told the Jamaica Observer that if his family hadn’t been getting the runaround to clear a container at the wharf in Kingston since January, his wife would have been safe and sound with them today.

The couple recently got married and was awaiting a shipment of used items to furnish their home.

Clarke said he was at the wharf awaiting the arrival of his wife, who had remained in Mandeville in order to ensure that she would take the correct amount of money to clear the goods, as each time they tried over the three months they were told they had additional fees to pay.

Near midday when she did not arrive, he called her phone.

“I became concerned and I tried to find out what’s keeping her so long. When I called, a taxi man answered,” Carke said, explaining that the taxi driver told him that he was at the scene of “a great accident” and that he had picked up the phone.

“Thousands of people are coming in with used items and they are telling us that we must pay the price for a brand new item. My wife made seven to eight trips to the wharf, not to include the trips that me and my mother took on a separate occasion, not to mention what me and my brother-in-law took,” Clarke said.

“Every time they come up with an amount and we pay it they give us another amount to pay, and an even more exaggerated price. My brother-in-law and I were told that we only owed $41,600 this morning. Ten minutes later they raised the price to over $412,000. They keep coming up with a new price, even after they signed it off,” Clarke claimed.

At press time last night the Jamaica Constabulary Force said that at least four people had died, but did not identify them. According to the police, at least 11 people were taken to hospital following the crash which took place after 11:00 am.

Police theorised that the driver of the Toyota Hiace bus, which was being operated as a public passenger vehicle, was speeding when the crash occurred. The vehicle reportedly slammed into a truck, flipped multiple times, then landed right side up on the Jersey barrier.

Cornelia’s brother, Oneil Montague, said he didn’t want to even begin thinking that his sister was dead. He shared, though, that other anxious family members had been checking around at funeral homes.

“I am concerned about my sister. If my sister never had to be coming from Mandeville to give us some funds to [sort out] what we were dealing with, probably she wouldn’t have been in that accident,” he said.

“My mother cannot deal with something like this now. My nephew went to check at funeral homes, so we are waiting until he returns to see what is taking place on that end. Nobody would like to hear that she passed. I am not even putting my mind there. I have been to the wharf three consecutive days last week. If the situation was dealt with from January, this wouldn’t happen,” he fumed.

Meanwhile, Dwayne Maitland, whose 20-year-old daughter Jannelle was one of the injured passengers, was hopeful. The update from doctors he received when he spoke to journalists yesterday evening was that his daughter, who as travelling from Mandeville after visiting relatives, was experiencing internal bleeding and had suffered cranial damage.

Dalecia Murphy said her brother-in-law, Derrick Pryce, was one of the injured passengers. She shared that he had initially been taken to a private medical facility, but was referred to Spanish Town Hospital. She said that he complained about pain and of feeling liquid draining inside his body.

“We went to the doctor and they said they don’t have any X-ray machine. Him seh him feel like blood is running inside. He was impacted in the neck, back, and chest. Him seh all him shoes fly off a di bus,” Murphy said.

Rosalea Hamilton | The CARICOM fiasco: What next?