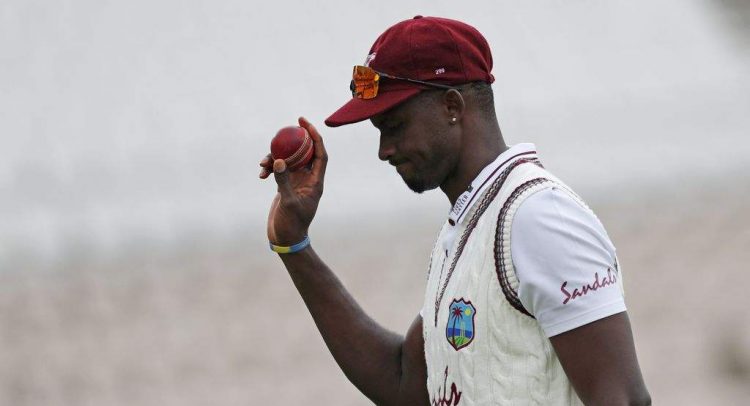 Holder takes six as England slump to 204 all out

SOUTHAMPTON, United Kingdom (AFP ) — West Indies captain Jason Holder returned Test-best figures of 6-42 as England slumped to 204 all out on the second day of the series opener at Southampton on Thursday.

Holder, the world’s top-ranked Test all-rounder, surpassed his previous Test-best of 6-59 against Bangladesh at Kingston two years ago, making full use of overcast conditions at the Ageas Bowl.

His haul, the sixth time in his past 10 Tests that Holder has taken five or more wickets in an innings, included the prize scalp of opposing captain Ben Stokes, who top-scored with 43 after winning the toss.

Shannon Gabriel, who did the early damage, took all the other wickets for impressive figures of 4-62.

The fast bowler was initially selected as a travelling reserve for this series before regaining full fitness following ankle surgery.

England slipped to 87-5 before a stand of 67 between Stokes (43) and vice-captain Jos Buttler (35) repaired some of the damage. Off-spinner Dom Bess chipped in with a useful 31 not out.

But with both sides seemingly stronger in bowling than batting, it is by no means certain that West Indies would emerge with a first-innings lead.

England could have been dismissed even more cheaply, with Stokes dropped on 14 and 32 after Kemar Roach floored a difficult diving chance at long leg before Shamarh Brooks spilt a far easier opportunity at extra cover.

Left-hander Stokes, leading the side in the absence of regular captain Joe Root, missing this match following the birth of his second child, struck fast bowler Gabriel for two square-cut fours and a superb front-foot drive off Roach went for another boundary.

But Holder had Stokes, second in the all-rounder rankings, caught behind as he aimed legside after advancing down the pitch.

England badly needed a big score from Buttler, who had just one hundred from his 41 previous Tests.

But having hit seven fours, he was undone by a superb Holder delivery that took the outside edge, with wicketkeeper Shane Dowrich holding a diving one-handed catch.

Holder then had fellow Barbados-native Jofra Archer lbw for a duck, although for the third time in the innings he had to overturn an original not out decision by English umpire Richard Kettleborough.

Holder was not finished, having Mark Wood caught in the gully.

England resumed on 35-1 after rain marred international cricket’s return from lockdown on Wednesday, when both teams took a knee in support of the Black Lives Matter campaign.

But with the continued heavy conditions under the floodlights at Hampshire’s headquarters again making life difficult for the batsmen, they were soon 51-3 as Gabriel removed Joe Denly (18) and Rory Burns (30).

Holder then got in on the act, having Zak Crawley lbw with one that came back after moving several deliveries away before Ollie Pope was caught behind as the West Indies’ joyful shouts echoed round the empty stands that will be a feature of this three-match behind closed doors contest.

West Indies have not won a Test series in England since 1988 but they hold the Wisden Trophy after a 2-1 success in the Caribbean last year.

Main photo: West Indies’ Jason Holder leaves the field with the ball after taking six wickets to help bowl out England for 204 runs in the first innings on the second day of the first Test cricket match between England and the West Indies at the Ageas Bowl in Southampton, southwest England on July 9, 2020. (Photo: AFP)