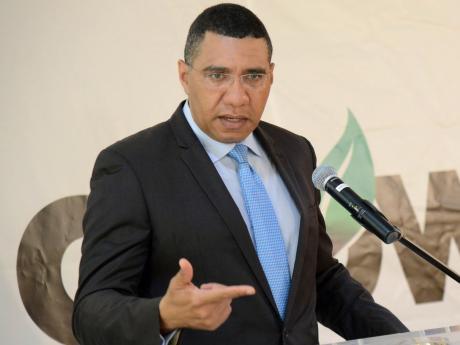 Prime Minister Andrew Holness has reaffirmed that the country is ready for investment.

In his pitch, Holness pointed out that while investors are risk-takers, they need to be certain before taking a dive.

“What Jamaica is offering is a certain environment. An environment in which you can take a risk,” said Holness, who pointed out that this was not always the case, as due to the global financial crisis in 2009 the country had a debt-to-gross domestic product (GDP) ratio of nearly 147 per cent, which led the Bruce Golding-led Administration to approach the International Monetary Fund (IMF).

Holness said, in a time of crisis, civil society, the business class and political classes all came on board to support prudent fiscal policies that led to, “business people not talking so much about fiscal issues. “What business people are talking about is growth. We now have economic certainty. Fiscal discipline is now a part of the DNA of the Government, whichever administration is in power. And if I was an investor, I would be happy with a country that has finally achieved that status”, he said yesterday.

“It was not easy. It was a difficult time for Jamaica, but the Jamaican people made the sacrifice, and I am speaking to an audience that would understand that placing seven per cent for a primary surplus is not an easy task for any country to do. And we have done that now since 2013,” Holness said.

The prime minister continued: “I guess, the best index of our success should be that we have reduced our debt from 147 per cent of GDP to, at the end of this fiscal year, we would be below 100 per cent of GDP.”

Holness said the Government is now at the point where it intends to build on economic stability to get on a certain pathway of economic growth.

He also used the opportunity to invite investment partnerships, through public-private arrangements with the Government as it relates to the divestment of assets.

Holness added that, while Jamaica is ranked number one in the Caribbean in doing business, the country on a global scale is ranked 70.

“So we have a far way to go, but I want you to appreciate that if your investment zone is this region, then you are making your best choice in Jamaica,” the prime minister said.

In the meantime, Holness, who referred to himself as a salesman, noted that investors from around the world are seeing the benefits and possibilities of investing in Jamaica.

Pointing to China, which “continues to plant their stake in Jamaica”, Holness said they have seen a strategic economic advantage in Jamaica due to location and resources, such as bauxite.

Holness pointed to the Jiuquan Iron & Steel (Group) Co Ltd’s Alpart refinery in Nain, St Elizabeth, which is Chinese-owned and operated and currently in an advanced state of creating a new US$6-billion economic industrial park in south-central Jamaica.

Minister of Industry, Commerce, Agriculture and Fisheries Audley Shaw, during his opening address at the forum on Tuesday, had stated that logistics is an area that is coming alive.

“Let me say that the whole area of logistics is really coming alive. We have a major project that will be implemented over the next few years in the south-central area of Jamaica, where a major Chinese company will be establishing… they are already there. They reopened the bauxite alumina plant at Alpart. They are going to double production… and they are going to establish an agro-industrial park and a processing centre for sale into the western hemisphere — a new community, whole new city, literally will be built around that initiative… that is a project that is on the cards and is coming to Jamaica,” Shaw said.

The refinery, which resumed production in mid-2017, had closed its doors in 2009 as a result of the global financial crisis, resulting in metal prices plummeting while the cost of oil as an energy source soared.

The three-day investment forum, which will end today, is being held at the Montego Bay Convention Centre in Rose Hall under the theme: ‘Connect for Business’.

The forum is one of Jamaica’s key initiatives designed to secure new investors, as well as investors who have already expressed an interest in the island.

In the past, the forum has reportedly achieved its objectives by creating more than 6,000 jobs and over US$300 million in investment.