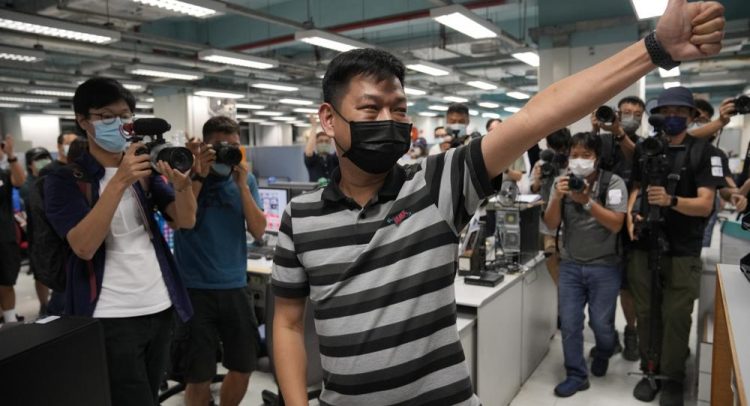 HONG KONG (AP) — Hong Kong national security police on Wednesday arrested a former editor at the now-defunct Apple Daily pro-democracy newspaper, weeks after it was forced to close after authorities froze its assets.

Lam Man-chung, who was the executive editor-in-chief of Apple Daily, was arrested on suspicion of conspiring to collude with foreign forces to endanger national security, according to the South China Morning Post newspaper, which cited an unnamed source. He is the eighth person from the newspaper who has been arrested in recent weeks.

Chan was among five Apple Daily executives and editors arrested on June 17, and Fung was first arrested at the airport late last month while allegedly attempting to leave on a flight to the U.K.

Police said a 51-year-old former editor was arrested Wednesday in relation to a similar case in June, but did not identify him. They also confirmed Wednesday that they had revoked bail arrangements for a 51-year-old woman and a 57-year-old man who were arrested in June and are detaining them for further investigation.

Hong Kong security minister Chris Tang denied that the arrests would trigger a “white terror” — a term referring to a climate of fear caused by political repression — among journalists.

“Whoever committed an offense will be arrested, disregarding their background, whatever they do, or what are their professions,” he said.

The Hong Kong Journalists Association criticized the “repeated targeting of journalists” from Apple Daily, stating that it was “shocked and puzzled” by the arrest of Lam since the newspaper had already ceased operations.

The association also asked the government to explain how news and publishing work which has been legally carried out and is protected under the city’s mini-constitution, the Basic Law, could endanger national security.

“Freedom of the press and the freedom to publish are important cornerstones for the success of an international city,” it said in a statement on its Facebook page.

In June, police raided the Apple Daily’s offices, taking away hard drives and laptops as evidence. The arrests of top executives, editors and journalists at the paper, as well as the freezing of $2.3 million worth of assets, led it to cease its operations last month. It sold a million copies of its final edition.

Following months of anti-government protests in 2019, Beijing last year imposed a sweeping national security law in the semi-autonomous city that critics say restricts freedoms promised to the former British colony that are not found on mainland China. More than 100 pro-democracy supporters have been arrested, and many others have fled abroad.

"Safety, health & rule of law in relation to street vending in Basseterre" is special topic on Working For You on Wednesday, July 21