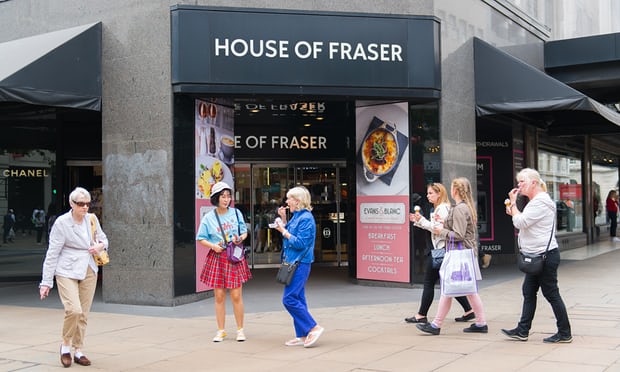 House of Fraser’s flagship store on Oxford Street in central London has been saved from closure, its new owner, Sports Direct, has announced.

The key site had been due to close under a company voluntary arrangement (CVA) announced by the troubled department store chain in June, before it went into administration.

However, the Sports Direct founder, Mike Ashley, stepped in with a £90m rescue deal and it was announced on Tuesday that the Oxford Street store would remain open.

Sports Direct’s Michael Murray said: “We said we would keep as many stores open as possible, and in less than a week we have saved the biggest store.

“Oxford Street was meant to close in January and now it’s safe, which is great news for all parties.

“Everyone must remember it was a bust business and we need landlords, councils and brands to pull together to save House of Fraser on the high street.”

James Keany, head of national agency at CBRE, the property firm which advises Sports Direct on all property related matters regarding House of Fraser, said: “This deal only happened because all parties realised it was better to keep the store open and fully operational.

“It was a real case of landlord and tenant genuinely working together and at great speed. Everyone was sensible about the terms of the transaction.”

When Sports Direct announced the acquisition of House of Fraser on 10 August, Ashley said his ambition was to transform the 169-year-old department store chain into “the Harrods of the high street”.

Sports Direct acquired all of House of Fraser’s UK stores, stock and the brand.

Before the rescue deal, 31 of House of Fraser’s 59 branches were earmarked for closure under its CVA, putting 6,000 jobs at risk. After the deal, Ashley said he was hoping to keep 47 stores open. Now that the Oxford Street store has been saved, it is unclear which of the other 30 stores previously at risk of closure will remain open.

Last week EY, House of Fraser’s administrators, revealed the retailer owed £484m to its creditors, including designer brands such as Gucci, Armani and Prada.

A dispute over payment with XPO Logistics, which operates two House of Fraser warehouses, has put 600 jobs at risk. XPO last week stopped processing orders, forcing the retailer to cancel all online orders and refund customers.

XPO is owed more than £30m, according to the EY report, and the GMB union said 627 staff at the warehouses in in Milton Keynes and Wellingborough were warned on Friday that they were at risk of redundancy and put on a 45-day consultation period.