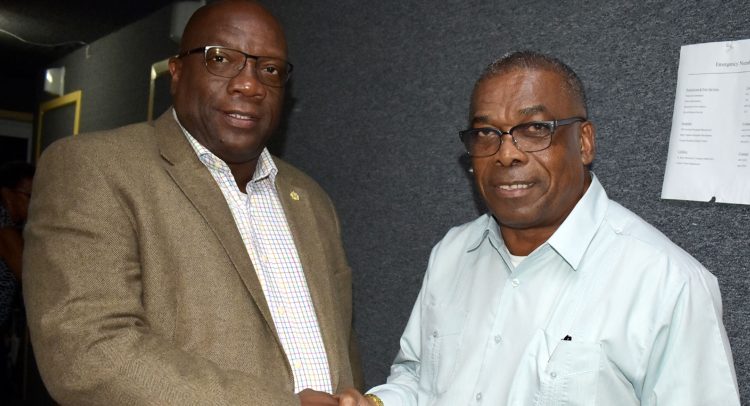 BASSETERRE, ST. KITTS, August 14, 2018 (PLP PR Media Inc.) — Prime Minister Dr the Hon Timothy Harris has said the Team Unity Administration is on the threshold of delivering the most significant social assistance in the history of the country, and more persons have been given an added window of opportunity to be part of it.

Dr Harris was at the time updating the Nation on the Household Assistance Programme while appearing on Straight Talk Show with host the Hon Ian Patches Liburd on WINN FM Monday evening August 13, where he said that the first phase of the programme which is registration had been extended on St. St. Kitts to Friday August 17.

It is understood that phase one of the Household Assistance Programme would kick off in Nevis on Tuesday August 21.

Under this programme which is meant to cater for economically challenged households, families with incomes of less than $3,000 per month will get a monthly $500 support from the Team Unity Administration.

According to Prime Minister Harris, who is also the Minister of Finance, Sustainable Development, National Security, People Empowerment, and Constituency Empowerment, Wednesday August 15 had initially been set as the day when Phase One of the Household Assistance Programme would be completed in St. Kitts.

“Today (Monday August 13) the Cabinet took a decision to extend that period from August 15th to the 17th,” announced the Prime Minister. “So, the good news is that more persons have additional opportunity to register for determination to be made on whether or not they qualify.”

On being asked by Straight Talk Show host the Hon Ian Patches Liburd how many persons had already registered, Prime Minister Harris said that 2,500 applications had been received as at Friday August 10. The number, he indicated, was a reflection of the state of play that the former administration left the country in.

Dr Harris commented that if one were to take that 2,500 household applications would have been received and if an average household has four persons, it meant almost 10,000 persons stand to benefit from this programme.

“It is then the most significant delivery of social assistance in the history of the country and we take particular pleasure in doing this good deed for the people,” said the Prime Minister. “It shows that we have
remained faithful to the poor of the country; faithful in our commitment to bring them closer to prosperity. That is to improve the quality of life; that is to give fair share of the progress of the country – a fair share of the resources.”

General and colonel among 14 arrested over Maduro 'attack'