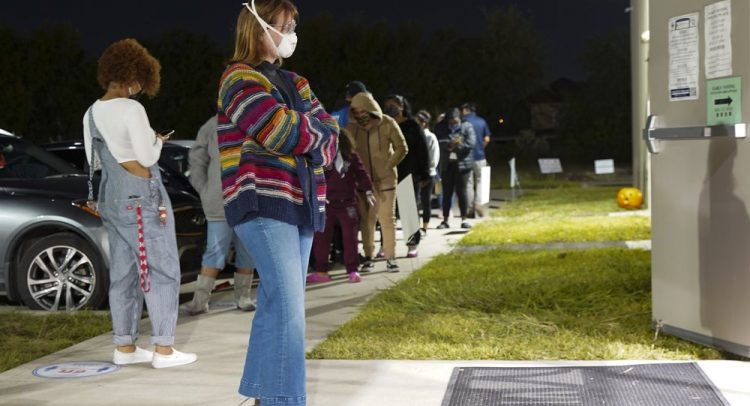 By Juan A. Lozano,

As rapper Bun B finished his late-night set during a drive-in concert to promote eight 24-hour polling places in and around Houston, he urged fans to go out into the night — and early morning — to vote.

“It feels good to see my people out there that are ready to vote, ready to be heard … If you haven’t voted yet, you need to drive on over. The polls are open right now,” the Houston-based performer said during the livestreamed concert Thursday.

Many followed the rapper’s advice as they flocked to the polling sites in Harris County — Texas’ most populous county — to cast their ballots starting late Thursday and into Friday, the last day of early voting in the state.

“It’s very convenient, especially for those people that work at night and sleep during the day,” Silveria Sanchez, 36, an emergency medical technician dispatcher, said after voting around 12:30 a.m. Friday during a break from her overnight shift at the Texas Medical Center. She walked five minutes to cast her ballot at a polling station at a food court in the sprawling Houston hospital complex.

Harris County officials have launched some innovative efforts to make it easier to vote in the presidential election. As well as the 24-hour polling sites, the county offers drive-thru voting, and has encouraged its voters to cast their ballots early. It has also challenged the state over limits on mail-in voting and drop-off boxes for absentee ballots. By Thursday evening, Harris County had surpassed its entire 2016 voter turnout of 1.3 million and, as of Friday morning, Texas voters had cast more than the state’s total 8,969,226 votes of 2016.

“Hopefully in the future, dozens of counties follow our lead and offer a night of 24-hour voting to support their voters,” said Harris County Clerk Chris Hollins.

“Harris County seems to be doing what they can at the county level to improve access to the polls,” Pomante said.

Some who attended Bun B’s concert Thursday night then drove to a nearby polling site at NRG Arena, which saw a steady stream of late night and early morning voters. Some danced as a DJ kept the party going in a parking lot.

By around 11 p.m. Thursday, Claudia Macias, 46, an educator from Houston, had cast her ballot and was standing outside the arena in the cold night air. She recalled how a woman who voted before her was escorting her much older mother who had “dressed to the nines” to go out and vote.

The woman apologized to Macias because her mother was slow.

“I go: ’We have 24 hours. You don’t worry about the time. You let her take her time to go in there and cast her vote,’” Macias said.

About 3 miles (5 kilometers) away at the Texas Medical Center, Ashley Lee, 32, Christian Mata, 24, and Tiffany Wiltz voted at around 1 a.m. They are all pharmacy technicians at Baylor St. Luke’s Medical Center and usually work until 11 p.m.

Lee said having the 24-hour voting site at the medical center made sense as many health care workers have shifts that can make it difficult to vote.

“We work long hours. This is perfect,” said Wiltz.

At Victory Worship Center, a church in north Houston, a steady stream of voters came in late Thursday night and early Friday. By around 2 a.m., the pace had slowed.

“I was surprised how many people came in. We’ve had a good flow,” said Herman Williams, the precinct judge at the polling station.

At a multiservice center in Kashmere Gardens, one of Houston’s historically African American neighborhoods, Felix Sylvester, 65, was the only person casting a ballot at around 3 a.m. Friday.

He voted after finishing his shift at a grain silo in suburban Houston at around 2 a.m. Sylvester said he hopes the county has 24-hour voting locations in future elections.

“Folks want to participate. They just have to be invited. This effort is part of that. It’s part of really opening the doors of government,” Hidalgo said.