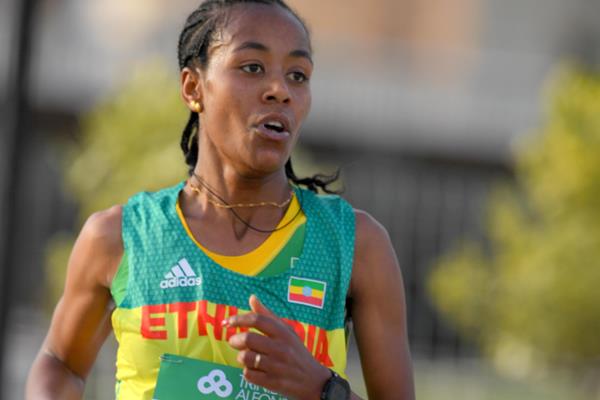 How Gudeta went from Dubai disappointment to victory in Valencia

Netsanet Gudeta gave a portrayal of someone who had been supremely confident of getting the gold medal at the post-race press conference for the IAAF/Trinidad Alfonso World Half Marathon Championships Valencia 2018 but sometimes a peek behind the curtains of the puppet show is required, followed by a quiet word with the man who pulls the strings.

It’s probably not exactly how Gudeta’s Italian manager Gianni Demadonna would really like to be described but having guided her career since she first came to international attention when winning the Great Ethiopian Run in 2013, he was able to provide another perspective on the Ethiopian’s stunning performance in Valencia on Saturday.

It was an outing that ended with her not only winning her first global title but also improving the women’s-only race half marathon world record by 14 seconds to 1:06:11.

What he revealed was that the championships were not even part of her plans until barely a month ago, despite her finishing sixth and fourth at the last two editions and standing on the podium having led Ethiopian to team silver medals on both occasions, and certainly the world record was not on anybody’s radar.

“In truth, I am very surprised, and I think everyone in the Ethiopian federation would have been surprised. It was a great performance and she was in good shape, a personal best was our target, but the world record not something we were thinking about even a few days ago.”

A TEAM MEMBER VIA THE BACK DOOR

“Netsanet really came to attention when she won the world cross country championships bronze medal in 2015 and then made a promising marathon debut in Paris last April (in 2:29:15). She has made steady progress over the last few years.

“She then set her half marathon personal best of 67:26 in Delhi and that was a very good run because Delhi was a very difficult race for many reasons, not least the pollution.

“So she then went to the Dubai Marathon in January and we had big hopes for that race and she didn’t actually take part in the Ethiopian trials for these (the world half marathon) championships.

“In principal, the Ethiopian federation was going to choose the team from those trials (in Sendafa on 28 January, which were held just two days after the Dubai Marathon so making it impossible for Gudeta to run in both races).

“However, it wasn’t her day in Dubai and she dropped out late in the race. When she returned to Ethiopia, the federation asked her to come to the national training camp in Addis Ababa – she usually trains on her own outside of the Ethiopian capital with her husband and national standard runner Gelelcha Girma – and train with the women who had qualified for these championships via the trails as they were a very young team,” explained Demadonna

US denies leaving air bases in Turkey and Qatar