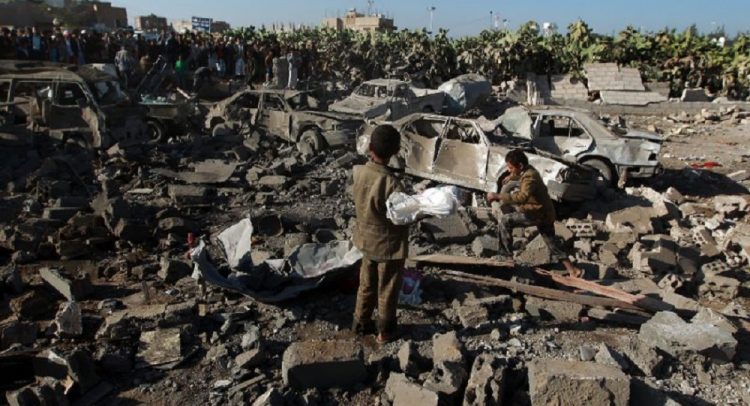 The Saudi-UAE military alliance fighting Houthi rebels in Yemen has been slammed by Human Rights Watch, which has accused the pair of reaching “dubious conclusions” in its post-air attack analysis and failing to properly investigate alleged war crimes.

In a damning 90-page report released on Friday, the rights group accused the alliance’s investigative body, the Joint Incidents Assessment Team (JIAT), of “absolving coalition members of legal responsibility in the vast majority of attacks”.

“Many of the apparent laws-of-war violations committed by coalition forces show evidence of war crimes,” said HRW in the report.

“JIAT investigations show no apparent effort to investigate personal criminal responsibility for unlawful air attacks. This apparent attempt to shield parties to the conflict and individual military personnel from criminal liability is itself a violation of the laws of war.”

The Saudi-led coalition, which has been at war with Houthi rebels since March 2015, has repeatedly denied allegations of war crimes, saying its air attacks are not directed at civilians.

However, data collected by Al Jazeera and the Yemen Data Project, revealed that almost one third of the 16,000 air raids carried out on Yemen since March 2015 have struck non-military sites.

These attacks have targeted weddings, hospitals as well as water and electricity plants, killing and wounding thousands.

At least 10,000 people have been killed since the start of the conflict, according to the UN. Analysts say that toll is likely to be higher.

Previous investigations by the Saudi-led alliance also absolved itself of any real responsibility and instead put the blame on the Houthis, the report added.

The HRW said that JIAT often appeared to find that an air attack was lawful “solely because the coalition had identified a legitimate military target, but did not appear to consider whether the attack was lawfully proportionate or if precautions taken were adequate”.

The rights group also said that JIAT downplayed air attacks on a residential complex in the port city of Mokha, which killed at least 65 people, saying the complex was “partly affected by unintentional bombing”.

An attack on a water well in September 2016 was termed an “unintended mistake” by the JIAT.

An HRW investigation later found at least 11 bomb craters at the site where dozens of civilians were killed and wounded.

“Governments selling arms to Saudi Arabia should recognize that the coalition’s sham investigations do not protect them from being complicit in serious violations in Yemen.”

The US, UK, Canada, France and Spain have all sold weapons to Saudi Arabia in recent years despite repeated petitions from human-rights groups.

Some of those weapons have been used in the conflict.

The US has been the biggest supplier of military equipment to Riyadh, with more than $90bn of sales recorded between 2010 and 2015.

Following a recent air attack on a school bus that killed 40 children, individual members of congress called on the US military to clarify its role in the war and investigate whether support for the air raids could render American military personnel “liable under the war crimes act”.

In July this year, Saudi Arabia’s King Salman issued a royal decree “pardoning all military personnel who have taken part in the Operation Restoring Hope [begun in April 2015] of their respective military and disciplinary penalties”.

The sweeping and vaguely worded statement did not clarify what limitations, if any, applied to the pardon.

HPV tests can replace most Pap smears, according to new recommendations