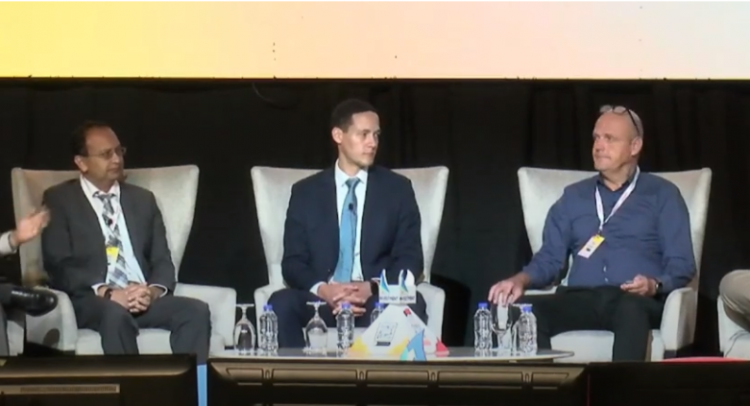 Huge Economic Benefits to be Reaped from Renewable Energy Transition

Port of Spain, TRINIDAD and TOBAGO.

CARICOM member states have committed to a target of 47% electricity generation from renewables by 2027.   This will require billions of investment dollars. So how can the region make renewables attractive to investors?  And why should the Caribbean take on this burden when CARICOM’s total contribution to global greenhouse gas emissions is extremely small?

A compelling case was made at the recently held Caribbean Investment Forum (CIF) on the enormous economic benefits the region would reap from transitioning to renewable energy usage.

CARICOM Secretary-General Dr Carla Barnett warned that climate change was an existential threat to island nations.  “To combat it we are required to build environmental and economic resilience urgently.”  Building a robust renewable energy sector also presents an opportunity for economic transformation, she said, and noted that the cross-sectoral impact of energy transition within the Caribbean will:

Echoing her sentiments, Caribbean Export Executive Director Deodat Maharaj said: “A green economy transition presents the ideal opportunity to lessen pressure on foreign exchange reserves as well as limit exposure to price volatility in international energy markets, which we are seeing now. Equally as important, the transition has the potential to spur economic growth by lowering the marginal cost of energy for the private sector as well as lowering overall energy intensity.”

In addition, he noted that a 2020 report jointly published by the International Labour Organization and the Inter-American Development Bank, “estimated that a green economy transition will help create approximately 400,000 jobs, a big boost to our economies.”

The International Renewable Energy Agency has also estimated that for every US dollar invested in energy transition, an additional US93 cents of GDP growth will occur above the business-as-usual scenario in the region, Maharaj said.

But how will the region finance the billions of dollars needed to undertake the necessary projects? This was the focus of the Renewable Energy Roundtable, entitled Energy transition: Making renewables attractive for private sector investment, on Day 3 (November 11th 2022) of the Caribbean Investment Forum, which was held at the Hyatt Regency in Trinidad, and organized by the Caribbean Export Development Agency (Caribbean Export) in collaboration with the Government of Trinidad and Tobago, CARICOM, the Caribbean Development Bank, and the Caribbean Association of Investment Promotion Agencies with the support of the European Union.

“NEC has been working with the IDB and by the end of this month (November) we will launch T&T’s hydrogen road map, which would lay the framework for how it would achieve a decarbonised energy industry over the next 40 years”, Paltoo said.  “This is a long-term plan starting with energy efficiency, then renewable energy and ultimately decarbonisation and calls for partnership between the private and public sectors”, Paltoo continued.

Predicting that Trinidad and Tobago would be a producer and exporter of hydrogen in the foreseeable future, he disclosed that, an estimated 25 gigawatts of power would be required by the country’s petrochemical, energy and power industries: “we have determined that offshore winds are the most reasonable option,” to achieve this.  Further studies are still to be done, he added.

Republic Bank’s McQuilkin said the returns on renewable energy projects “are attractive and very long-term.”  but the projects were very costly so an investor must have the confidence that the overall financial structure will be long-term and that needs political stability to ensure the investment decisions would not be reversed.   He also hoped to see regional manufacturing have opportunities and he suggested the need for training and coaching for the local population to participate in the benefits from renewable energy investment.

One small business owner in the audience pointed out the capital cost to transition might be too much for a small business.  He estimated that to convert his fleet of delivery vehicles to CNG would cost upwards of TT$70,000.  “Are there incentives being considered for small, hyper localised businesses like mine? he asked Paltoo.

Fische said societies needed to understand that energy transition was not only necessary, it would never stop.  The culture needs to change to support that notion, he said.  “The technology is going to move the transition forever,” he said.

Endorsing the view that populations needed to understand that energy transition was needed “to ensure continuity of life as we know it,” Paltoo advised that education was critical, from early childhood to university, to achieve this.

The inaugural Caribbean Investment Forum, set to become a flagship event on Caribbean Exports’ calendar,  took place in Port of Spain, Trinidad from November 8-11, 2022.  The high-level, business-focused event connected key regional decision-makers, innovators, and entrepreneurs with the world’s most influential investors to explore the investment opportunities available throughout the region. It also served as a launch pad for thought leaders keen on accruing the benefits of first-mover advantages in this developing space.

Under the theme Building A SMARTer, GREENer Caribbean, stakeholders focused, in particular, on investment opportunities in technology, agriculture, renewable energy, transport and logistics and innovation.   These projects will improve the lives of over 30 million Caribbean people in the countries across the Region.