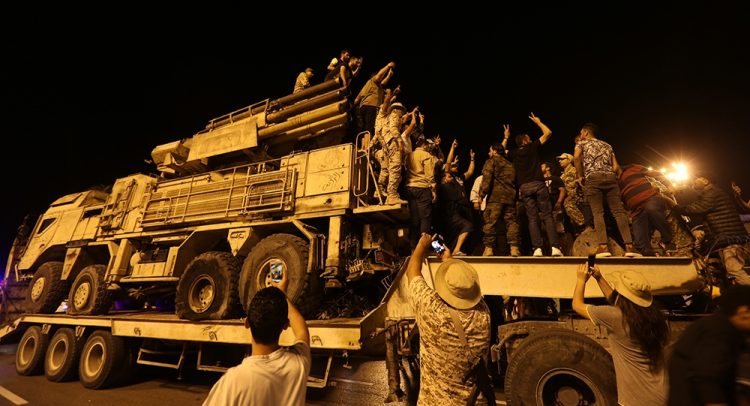 Hundreds of Russian military contractors in Libya were evacuated on Monday after retreating from fighting on the capital’s front lines, forces backing the unity government said.

The claim comes after a series of setbacks for eastern-based military commander Khalifa Haftar’s year-long offensive to seize Tripoli from the UN-supported Government of National Accord (GNA).

“An Antonov 32 military cargo plane landed at Bani Walid airport to resume the evacuation of Wagner [Group] mercenaries who had fled southern Tripoli to an as-yet unconfirmed destination,” pro-GNA forces wrote on Twitter.

Pro-GNA forces said Monday some “1,500 to 1,600 mercenaries” had fled from the front lines to Bani Walid, a city 150km (93 miles) southeast of Tripoli. They said the previous day seven cargo planes had landed at the city’s airport, bringing in munitions and weaponry and evacuating the fleeing fighters.

The departure of the Russians first reported on Sunday was another blow to Haftar’s Libyan National Army (LNA) and his foreign allies.

Russian fighters allied to the LNA retreated with their heavy equipment from the capital to Bani Walid’s airport, said its Mayor Salem Alaywan.

He told Reuters news agency the Russians were then flown out of western Libya to Jufra, a remote central district and LNA stronghold. “They [the Russians] were flown in three military planes to Jufra, and their military vehicles were driven there,” said Alaywan.

LNA spokesman Ahmed al-Mesmari denied any foreigners were fighting with his forces.

The year-long battle for Tripoli has left hundreds dead, including dozens of civilians, and displaced more than 200,000 people.

Muhammad Qanunu, a GNA military spokesman, said in an address on local television those fighting with the LNA would be captured or killed and the areas they previously held made safe for the return of civilians.

“As of yesterday, we started combing the liberated areas to ensure the safety and return of everyone who was displaced. We are still closely monitoring the movement of the remnant militias and mercenaries who are trying to reorganise their fragmented ranks. We are fully prepared to crush them,” Qanunu said.

Al-Mesmari has said his fighters would pull back from some positions south of Tripoli as part of a “redeployment”.

The presence of the Russian fighters has been widely documented by diplomats and journalists, and photographs purporting to show Russians in Bani Walid have been posted on social media.

According to a leaked United Nations report, Russian private military contractor Wagner Group deployed about 1,200 mercenaries to Libya to strengthen Haftar’s forces. They have been identified by their equipment, typically reserved for Russia’s armed forces.

UN monitors identified more than two dozen flights between Russia and eastern Libya from August 2018 to August 2019 by civilian aircraft “strongly linked to or owned by” Wagner Group – a shadowy Russian paramilitary organisation seen as close to President Vladimir Putin – or related companies.

The Kremlin has always denied involvement.

Across the Wagner Group, personnel are predominantly Russian but also include citizens of Belarus, Moldova, Serbia and Ukraine, the UN report said.

“The Russian mercenaries are not welcome. The [city] council is protesting the presence because they have taken part in attacking Libyan cities and also killing and wounding innocent civilians,” said Abdelwahed.

Haftar’s forces are backed by Russia, Egypt and the United Arab Emirates. The GNA is supported by Syrian fighters allied to Turkey, while Haftar is also using Sudanese fighters.

The GNA has, with Turkish help, made sudden strides in recent weeks, seizing a string of towns from the LNA, capturing the strategically important al-Watiya airbase, and destroying several Russian-made air defence systems.

“The withdrawal [of the Russians] from the greater Tripoli area is a very meaningful event because it deprives the LNA of its most effective, best-equipped foreign fighting forces on that key front,” said Jalel Harchaoui, research fellow at the Clingendael Institute.

Emad Badi, a senior fellow at the Atlantic Council with a research focus on Libya, agreed the departure of the Russian mercenaries was a major setback for Haftar.

“Why they pulled out now is a subject of speculation, but you have to take into account that during the past week Turkey has really upgraded its aerial capabilities in Libya and has significantly weakened the strategic advantage that the Russian mercenaries provided.”

Badi said it was “obvious” that there was “some form of backdoor deal between Turkey and Libya in terms of allowing these mercenaries” to pull out.

He noted the move had major consequences for the battle of Tripoli.

“Since late August, it’s actually the Russian mercenaries that have enabled the ground offensive to not only continue but for Haftar’s troops to actually make territorial headway,” he added.

“As soon as they pulled out in roughly, I would say, eight hours, Haftar lost the territory that he’s gained in eight months – that’s how much of a strategic military advantage these Russian groups provided. That doesn’t mean that the war has ended but it does mean that in terms of capturing Tripoli, I don’t think it’s realistic to assume that that would be possible if the backers of Haftar do not significantly escalate against Turkey.”

The LNA still holds the town of Tarhouna south of Tripoli with the help of a local armed group.

In the past two days, LNA forces have withdrawn from some positions in southern Tripoli in what they described as a humanitarian gesture. Forces allied to the GNA re-entered some of those areas.

Libya has been without central government control for nine years, and since 2014 it has been divided between two main rival governments in the east and the west. The conflict has turned into a proxy war between the foreign allies of the two sides.