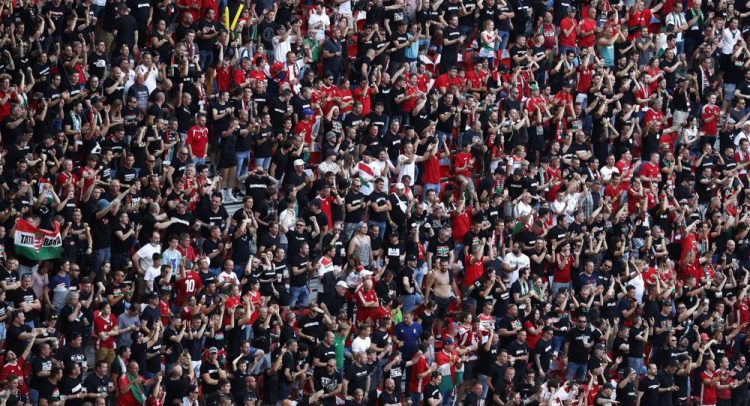 BUDAPEST, Hungary (AP) — Tens of thousands of soccer fans packed the Puskas Arena in Budapest last week to attend Euro 2020 matches. It was the first full-house international soccer event in Europe in more than a year — made possible largely by Hungary’s adoption of government-issued immunity cards.

The only one of the tournament’s 10 host countries to allow full crowds in stadiums, Hungary has conducted one of Europe’s most successful COVID-19 vaccination drives. The immunity cards attest that their bearers have received at least one vaccine dose or recovered from COVID-19, and allow them access to sports events as well as to services and venues such as hotels, spas, concerts, theaters and indoor restaurant dining.

Yet while the cards have allowed many to regain many aspects of pre-pandemic life, others worry that their use could impact fundamental rights.

“There was a lot of anxiety in society on potential discrimination,” said David Vig, director of rights group Amnesty International Hungary. “(The government) said, ‘There will be a distinction between people: Those who have the vaccination card, and those who do not.’”

Hungary’s procurement of vaccines from Russia and China, as well as through the European Union, quickly gave it the second highest vaccination rate in the 27-member bloc after Malta. More than 66% of adults have received at least one dose of a vaccine, according to the European Centre for Disease Prevention and Control.

But in recent weeks, as most of those willing to be vaccinated have already got a jab, the pace of vaccination has slowed dramatically. Government figures show that some 2 million people still do not have an immunity card, which restricts them from many opportunities available to cardholders.

These continued restrictions for the unvaccinated underlie the government’s strategy of providing incentives for inoculation, Vig said.

“The vaccination card and the strategy behind it was good from the government’s perspective. That is, it kind of pushed people towards vaccination,” he said.

But in a statement in April, the Hungarian Civil Liberties Union argued that the cards discriminate against those who “due to their state of health, cannot be vaccinated temporarily or permanently,” such as women in certain stages of pregnancy, or those with chronic conditions that make vaccination inadvisable.

Those people, and others who could not complete the mandatory online vaccine registration for lack of internet access, face discrimination, the group argued.

While more than 60,000 fans were permitted into the Puskas Arena last week for Euro 2020 matches, Hungary’s government has continued to limit other public events such as protests for those without immunity cards, citing pandemic concerns.

In early June, several thousand people rallied in Budapest against plans by right-wing Prime Minister Viktor Orban to host a Chinese university in the capital. Protest organizers, in an effort to skirt rules capping outdoor events at 500 people for non-cardholders, split the march into several smaller groups.

It is instances like these, Vig said, that demonstrate that the government has used the pandemic and immunity cards to curtail fundamental rights despite dramatically improving pandemic indicators in recent weeks.

“More than 50-55% of society was already vaccinated, (but) demonstrations were still impossible. … That is a very clear violation of international human rights standards,” Vig said, adding, however, that such limits on protests were later repealed.

“The government has some power to restrict these rights for a certain amount of time if it is necessary and if the restrictions are proportionate with … the aim that they want to achieve, but not for a prolonged or an unlimited time,” he said.

Akos Sipos, 45, a Budapest web analyst, said he is uncomfortable showing his personal identification alongside his immunity card when entering public venues, granting access to his personal information to those checking the card.

“I don’t feel that it’s a good thing if I have to show my identity card to a security guard if I want to eat a pizza somewhere,” Sipos told The Associated Press.

“They have no business knowing when I was born” or other personal data, he said.

Still, he accepted that such measures are required to keep the pandemic under control.

“I understood this whole card thing as a necessary evil,” he said. “Those who have been vaccinated definitely have to be tracked somehow.”

Bela Szandelszky contributed to this report.

FILE – In this June 15, 2021 file photo, Hungarian fans wait for the start of the Euro 2020 soccer championship group F match between Hungary and Portugal at the Ferenc Puskas stadium in Budapest, Hungary. Tens of thousands of soccer fans packed the Puskas Arena in Budapest last week to attend Euro 2020 matches. It was the first full-house international soccer event in Europe in more than a year — made possible largely by Hungary’s adoption of government-issued immunity cards. (AP Photo/Laszlo Balogh, Pool, file)