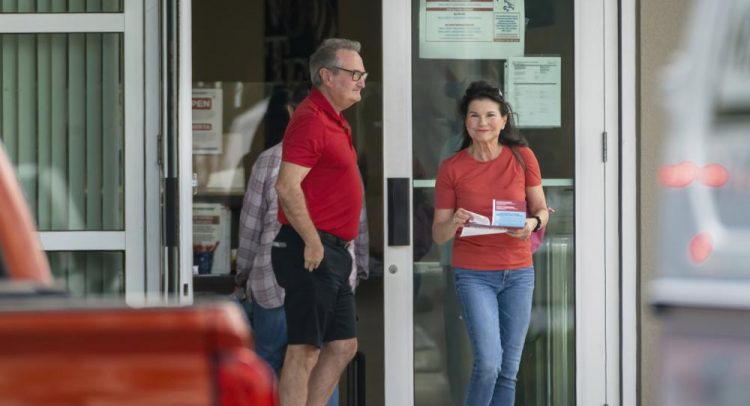 By FRIEDA FRISARO and JULIE WALKER

“We won’t really start to see any significant impacts from Nicole until really Tuesday night to Wednesday, so really it shouldn’t have a huge impact on voting operations tomorrow,” hurricane specialist Phillippe Papin told The Associated Press.

“Unfortunately this is going to be a very large storm, with a very large wind field on the north side. This is going to cause quite substantial surf, potentially dangerous storm surge somewhere along the Florida east coast, and heavy rainfall and probably significant winds over a large area,” Papin added.

Hurricane watches are in effect for the northwestern Bahamas and Florida’s Atlantic Coast from Hallandale Beach, north of Miami, to just north of Daytona Beach, as well as inland to Lake Okeechobee, the Miami-based National Hurricane Center said in its latest advisory.

A Storm Surge Watch has been issued from Broward County to halfway up Georgia’s coast.

The hurricane center predicted a particularly wobbly forward movement for Nicole as it approaches Florida before crossing into the northwest Gulf of Mexico. At 10 a.m. Monday, it had top winds of 45 mph (75 kmh) and was centered about 495 miles (795 kilometers) east of the northwestern Bahamas, the advisory said.

“Do not focus on the exact track of Nicole since it is expected to be a large storm with hazards extending well to the north of the center, and outside of the cone, and affect much of the Florida peninsula and portions of the southeast U.S.,” the advisory said.

Florida Gov. Ron DeSantis declared a state of emergency for 34 counties in the potential path of the storm, out of an abundance of caution.

“While this storm does not, at this time, appear that it will become much stronger, I urge all Floridians to be prepared and to listen to announcements from local emergency management officials,” DeSantis said in a statement.

“While this storm does not, at this time, appear that it will become much stronger, I urge all Floridians to be prepared and to listen to announcements from local emergency management officials,”

Large parts of the state have yet to recover from destructive Hurricane Ian, which slammed into southwestern Florida on Sept. 28 as a strong Category 4 hurricane and dumped massive amounts of rain, causing flooding across central Florida.

Along Florida’s central Atlantic coast, nervous county managers warned residents that the tropical storm could bring more flooding and beach erosion only weeks after Ian inundated the region with unprecedented levels of water.

In Volusia County, home to Daytona Beach, county officials advised coastal residents to consider moving to a safer location as soon as possible.

Volusia County Emergency Director Jim Judge said the area could get 4 inches to 8 inches (10.2 cm to 20.3 cm) of rain and winds strong enough to cause flooding and widespread power outages, along with more permanent damage.

“We need to take this storm very seriously because it could cause more coastal erosion, which could be devastating to our beachfront properties impacted by Hurricane Ian,” Judge said in a statement.

A subtropical storm is a non-frontal low-pressure system that has characteristics of both tropical and extratropical cyclones. They tend to have a larger wind field, extending much farther from their centers. Forecasters said the storm could possibly transition into a tropical system as it continues to develop.

The Atlantic hurricane season began on June 1 and ends on Nov. 30.

Rihanna talks motherhood, Super Bowl: ‘It was now or never’

‘The Crown’ returns to blur the line between royals, fiction