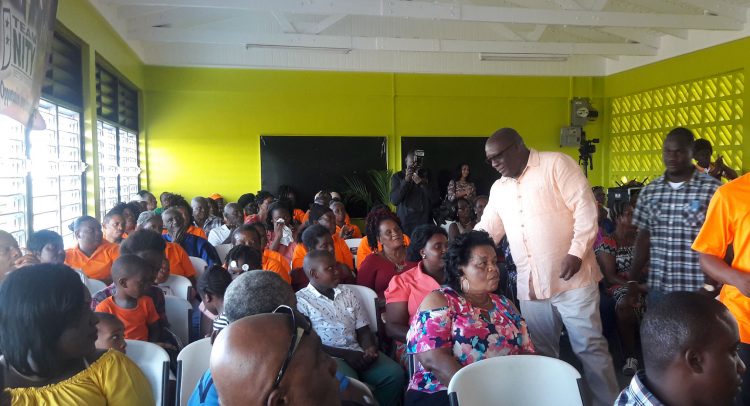 I stand firm with the people of St. Kitts and Nevis, says Prime Minister Harris 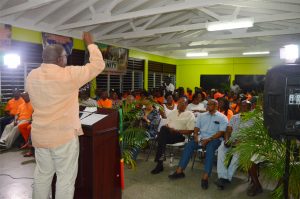 BASSETERRE, ST. KITTS, May 21, 2018 (PLP PR Media Inc.)* — For those who were hoping that their false narrative and mischief had unravelled Prime Minister Harris’ hold on power, he had a forceful response on Sunday May 20 when in Unity’s stronghold Prime Minister Dr the Hon Timothy Harris spoke from the heart with candour and passion.

“No matter what the desperados for power will say, I stand firm with the people of St. Kitts and Nevis,” said Prime Minister Harris at the Prime Minister’s Open Forum which was held on Sunday evening May 20 at the Edgar T. Morris Primary School in Tabernacle, which was attended by hundreds from across the island and from all political parties.

“When I came to the office of the Prime Minister I had served in almost in every ministry of government,” reminded Dr Harris, who is also the Minister of National Security and National Political Leader of the Peoples Labour Party (PLP), one of the three parties in the Team Unity Administration.

He explained that he had delivered excellently in every ministry in which he had been put, including Education, Foreign Affairs, Agriculture and Housing and as records show he was indeed the most experienced Prime Minister on entry to the position.

Prime Minister Harris committed to lead Team Unity again to victory, reminiscing on his work throughout the length and breadth of the country in the run-up to the 2015 election campaign.

“Tell them (distractors), we have work to do, and I am committed to do the work of the people,” said Dr Harris. “It is the work of the people that I have done so well, which gave me confidence to literally abandon my constituency (Number Seven) in the heat of the 2015 election campaign and go in East, in West, in Central, in Four, and in Six. In fact I went everywhere, to try to deliver as many seats for Unity.”

Referring fondly to Mr Valentine Lindsay, former Chairman of the People’s Action Movement (PAM), Dr Harris observed that “he (Valentine) knows how much work he I and did in Constituency Number Eight.”

Dr Harris reiterated what he had said in 2015 that he would serve the country as its most illustrious Prime Minister for ten years (two terms), and after that he would not come back looking for the prime ministership, directly commenting that former Prime Minister Dr Denzil Douglas still wants to come back after having served for twenty years.

The Prime Minister’s Open Forum which was part of Team Unity’s Good Governance and Prosperity Agenda, was chaired by Attorney General the Hon Vincent Byron, and was addressed by Senior Minister the Hon Vance Amory, and Minister the Hon Ian Patches Liburd. In attendance included Minister of State for Health the Hon Wendy Phipps, Cabinet Secretary Mrs Josephine Huggins, and Deputy Speaker Senator the Hon Akilah Byron-Nisbett among others.