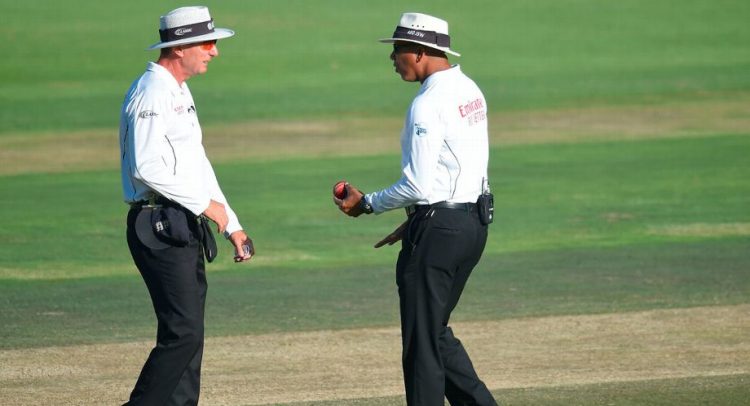 The ICC has decided to allow substitutes only in Test cricket if a player shows symptoms of Covid-19, and has also introduced a system of issuing two warnings per innings followed by a five-run penalty for repeated use of saliva on the ball.

Those decisions were approved by the ICC’s Chief Executive Committee (CEC) based on the recommendations made recently by the ICC cricket committee. The CEC also approved the use of non-neutral umpires for all international formats and added the use of an unsuccessful review for each team in each innings of a match. All these are interim adjustments to the playing conditions owing to the Covid-19 pandemic.

Price of saliva: five–run penalty for batting side

The ICC cricket committee, headed by former India captain Anil Kumble, had recommended that sweat and not any artificial substance should be used to shine the ball. That sweat was a safer option than saliva was approved by the ICC’s chief medical expert Dr Peter Harcourt, who had highlighted that Covid-19 was an airborne respiratory infection and highly contagious.

The ICC has said that the match officials will penalise teams only after a period of “leniency” as players get used to the new playing conditions which comprise staying in a bio-secure environment and playing behind closed doors.

In case saliva was applied on the ball by the fielding team, the ICC said the umpires will first clean the ball before play recommences. “Players will not be permitted to use saliva to shine the ball,” the ICC said in a media release. “If a player does apply saliva to the ball, the umpires will manage the situation with some leniency during an initial period of adjustment for the players, but subsequent instances will result in the team receiving a warning. A team can be issued up to two warnings per innings but repeated use of saliva on the ball will result in a 5-run penalty to the batting side.”

Like-for-like substitutes only in Tests

Teams will also be allowed to replace a player if he/she shows symptoms of Covid-19, but only during a Test match. “In line with concussion replacements, the Match Referee will approve the nearest like-for-like replacement,” the ICC said.

Kumble’s committee had deliberated on the issue and was not in favour of such substitutes once Harcourt said that test results could come back in about half hour time. Some of the cricket committee members had felt if testing could be done that quickly and a player was found infected that would mean both teams and coaching staff would need to go into isolation for two weeks as per the medical procedure. The committee felt in that case Covid-19 substitutes were not needed.

Neutral umpires will not be officiating in Tests for the first time since 2002. The CEC agreed that “owing to the current logistical challenges” home umpires would stand in all three formats. The local umpires would be picked from the ICC’s Elite Panel and International panel of match officials.

In order to remove the perception of bias, the cricket committee had recommended that an additional review should be granted to each team in every format, which the CEC has ratified. “The CEC has also confirmed an additional unsuccessful DRS review for each team in each innings of a match, keeping in mind that there may be less experienced umpires on duty at times. This will increase the number of unsuccessful appeals per innings for each team to three for Tests and two for the white-ball formats.”

Photo: Umpires will be able to levy a five-run penalty after two warnings for saliva application under new regulations (AFP)

Building evacuated while authorities disposed of a live artillery projectile