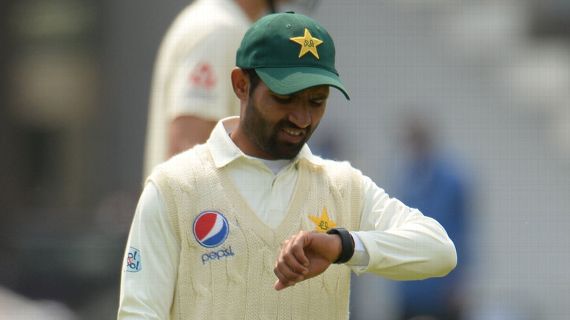 Anti-corruption officials have told Pakistan’s players not to wear smart watches on the field after a couple of their players were seen with them on the first day at Lord’s.

As per the ICC’s Player and Match Officials Area Regulations, wearing smart watches is prohibited on the field and areas designated as player and match official area [PMOA]. An ICC release on Friday confirmed that such devices must be surrendered, along with mobile devices, upon arrival at the ground on match days.

“The ACSU officer came to speak to us and told us it’s not allowed to wear them so we won’t be wearing them,” Hasan Ali said after the day’s play.

In an effort to combat corruption in cricket over the last few years, players and officials have been obliged to hand over their phones (and any other transmitting devices) to anti-corruption officials ahead of the start of play. They are then locked away and returned to them shortly after stumps.

ICC regulations state that: “Communication devices are prohibited within the PMOA, barring specific exceptions. Without exception, no player shall be in possession of, or use a communication device (such as a mobile phone or a device which is connected to the internet), while in the PMOA.”

An ICC spokesman told ESPNcricinfo: “Apple watches in any way connected to a phone/WiFi or in any way capable of receiving comms such as messages, are not allowed. In effect, it is considered a phone unless ‘disabled’ and just a watch.”

There are several legitimate reasons to continue to wear such a watch when disabled. It still tells the time, for example – though there is also a large clock overlooking the playing area at Lord’s – while fitness data can all be recorded and stored on a disabled device.

Asad Shafiq, who wore the watch on Thursday, had said in a pre-series interview with the commentator Ramiz Raja that players use the watch to track their daily exertions, and that they burn “around 3000 calories” on a regular day of Test cricket.

“We definitely get an idea [of fitness measures],” Shafiq said. “If you wear it the whole day you get an idea, you get the results of your workout in front of you, and you can calculate your targets for the next day.”

ESPNcricinfo understands that the ICC’s anti-corruption officer at the match, Peter O’Shea, was surprised by photographs appearing to show the devices and approached the Pakistan team management at the end of play. The ICC has the power to confiscate the devices and download all material from them in order to monitor recent activity.

While there is no allegation of wrongdoing, the ICC on Friday stated that it will caution players against wearing such devices in order to avoid such confusion in the future. Their own regulations may well be tightened to reflect that stance.