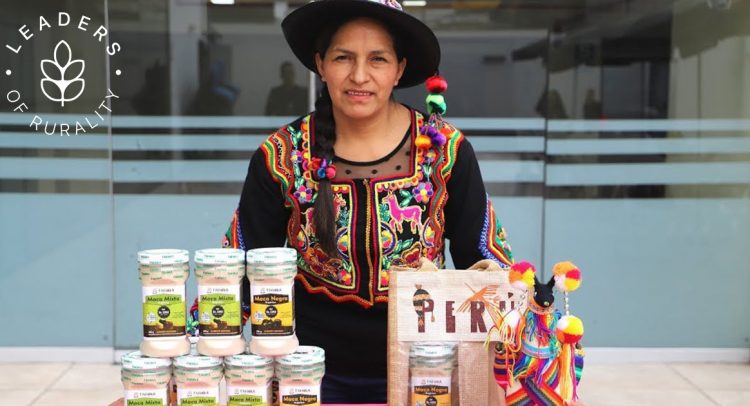 San Jose, 18 May 2022 (IICA) – Haydée Anccasi, the Peruvian founder of an organization that grows, mass produces and sells maca, an ancient crop that is native to that country, was recognized as a “Leader of Rurality” of the Americas by the Inter-American Institute for Cooperation on Agriculture (IICA).

The “Soul of Rurality” award, as it is called, is part of an initiative by the specialist agency for agricultural and rural development to pay tribute to men and women who are leaving their mark and making a difference in the rural areas of the Americas – a region that is key to food and nutritional security and to the planet’s environmental sustainability.

Haydée grew up speaking Quechua, in a rural community in the district of Huancavelica. Her father instilled in her a respect for Mother Earth—Pachamama in Incan mythology—and a passion for agriculture. She would later attend university in Lima and then visited the department of Junín, where she was introduced to maca, which only grows in the central Andean region, at an altitude of more than 4,000 meters.

There she founded Farinka Organics, a company that today provides a means of living for the 32 families that grow it, while taking special care of the environment. Currently, the super has attracted a great deal of attention in many countries, due to its exceptional nutritional qualities.

The Leader of Rurality award pays tribute to individuals who are playing a critical dual role, namely as guarantors of food and nutritional security and as custodians of the planet’s biodiversity, producing under all kinds of conditions. The recognition also highlights these individuals’ capacity to serve as positive examples for the rural areas of the region.

Haydée Anccasi, the woman who grew stronger through adversity

“I am an Andean woman, a Peruvian, who was born between the mountains and ravines of the department of Huancavelica. I come from humble beginnings and from a large rural family. My native language is Quechua and I grew up amidst Mother Earth, water, wind and the trees, in harmony with nature. My parents and grandparents taught me to farm and from I was a child I have had a passion for our Andean grains”.

Haydée Anccasi recounts her life story with great enthusiasm. Today, having traveled a long way since her origins, this woman is the General Manager and visible face of Farinka Organics, a company that she defines as a socially responsible enterprise, involved in the production, processing and marketing of organic maca and its byproducts. Farinka is located in the area from which the crop originates, more than 4,000 meters above sea level, in the Peruvian department of Junín.

Maca is an indigenous Peruvian plant with a history dating back thousands of years. It has been called a “super food”, given that since the time of the Incas it has been highly valued and has multiple uses, from boosting fertility to fighting insomnia. However, its popularity dwindled and during the 1980s it cultivation all but disappeared.

Haydée learned of the nutrition and health potential of maca during a visit to Junín and this led her to establish Farinka Organics, which today provides work for 32 farming families. The creation of this enterprise allowed Anccasi to fulfill her dream of increasing the value and use of an ancestral crop. The product is now sold in Lima, Cajamarca, Loreto, Ayacucho, Arequipa, Cusco and other parts of Peru, having also sparked the interest of consumers in other countries. In fact, in February 2020, Haydée travelled to Nüremberg, Germany, to participate in a food fair and to access new markets. However, conversations were then delayed, due to the difficulties caused by the COVID-19 pandemic.

Farinka Organics conducts the entire process, from planting to the processing that results in the final top quality products that are sold in different packaging formats, depending on the destination market. The entire process takes place in Junín. Thus, Farinka generates employment and adds value, while also playing an important social role.

“Maca is a product from the heart of our Peru, which allows us to place greater value on our ancestors. We plant it and tend it for nine months, much like a pregnancy and then we dry the grain in the sun for 100 days. This allows maca to retain its natural nutrients. I have been eating maca daily for the last 17 years and thanks to it I don’t use sugar”, says Haydée.

When she speaks about maca’s properties, she can’t contain her enthusiasm, as she explains that, “It is a top quality product that strengthens our immune system. It boosts intelligence and energy, by providing magnesium, zinc and selenium. It only grows in Peru, so it is almost like our flag. It can be taken as a vitamin and also make you sleep deeply, ensuring that you wake up feeling happy in the morning”.

Haydée is the third of eleven children and grew up in a farming community. As a child, she would watch her father singing in Quechua and making offerings to Pachamama, who in Incan mythology is equivalent to Mother Earth. Her father was a major influence on her in a childhood in which many creature comforts were lacking.

“Barefooted and in below zero temperatures, I would take out the llamas and alpacas to graze in la Puna, along with my siblings. We would use firewood for cooking and my father would rise at three in the morning to work tirelessly in the field, without the need for a clock and guided only by the light of the moon. Education was a great challenge, as we had no books and often had little more to eat than some fava beans and barley. From I was a girl, I dreamed of visiting Lima and traveling to other countries, but I felt this was out of my reach. These difficulties made me stronger”, she told us.

Haydée studied in Lima, at the Enrique Guzmán y Valle National University of Education, also known as La Cantuta. There in the capital city, she met her husband, who was attending the Universidad de San Marcos. Later, she returned to Huancavelica, where she got a job teaching and started to sell quinoa and other native crops in markets and in the street. She learned about maca, it cultivation and it benefits during a visit to Junín, her husband’s home district. The couple now have two children. Her parents-in-law taught her to grow maca and about its secrets and she decided to take some seeds with her to plant in Huancavelica.

It was the death of her father that marked a turning point in her life, prompting her to decide to devote her efforts to maca cultivation in “soul, heart and life”, as she puts it, paraphrasing the famous Peruvian waltz.

She explains that “Farinka was established in honor and memory of my beloved father, Felix Anccasi Ramírez, as a legacy of his love and sacrifice for us. When he died from lung cancer, I wept. I was tired of selling the bulk, unprocessed grains. One day I saw him in a dream and he told me that I should start a new business to provide work for the people in the community. That led to the beginning of the company, whose name is based on his initials, F.A.R., along with the word inka, because he was like an Incan”.

“Peruvian maca is energy, it’s health and it has tremendous potential to be consumed throughout the world, because it connects people to the land”, says Haydée.