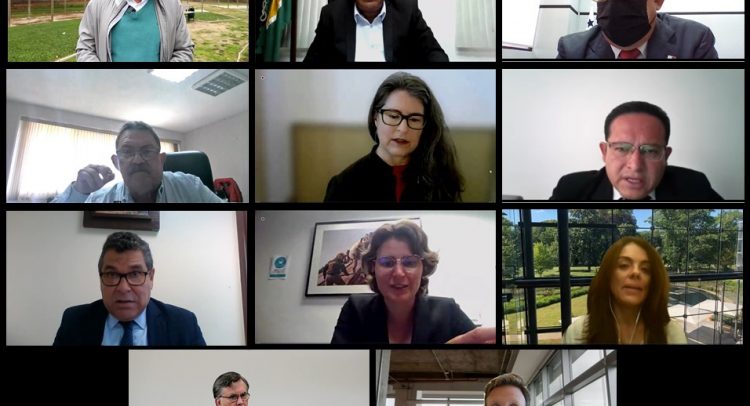 San José, 18 May 2022 (IICA). – The Inter-American Institute for Cooperation on Agriculture (IICA) inaugurated Digital Agriculture Week, a forum it is hosting together with Bayer, Microsoft and the World Bank, in which 15 startups from the Americas and various stakeholders from the technological and agricultural sectors will present, propose and coordinate ideas aimed at accelerating the digital transformation of agriculture and agrifood systems in the region.

The event, which will be held at IICA Headquarters in San José, Costa Rica, until May 19, began with a roundtable discussion among high-level policymakers.

At the event, which was opened by the Director General of IICA, Manuel Otero, the authorities shared their perspectives on the key role of digital agriculture in addressing the challenges facing agrifood systems in their countries and in Latin America and the Caribbean (LAC). The participants agreed that these challenges are associated with soil, water, climate change, pest and disease monitoring, agricultural extension, trade and sustainability, among other issues that have been exacerbated by the current context of the pandemic and the war in Eastern Europe.

“Technology can address these challenges and digitalization is critical to help farmers make better decisions and transform agricultural development, making it more productive and resilient. The Caribbean Community (CARICOM) is moving forward with a strategy for agriculture that seeks to increase competitiveness with smart technologies in the production process, as well as enhance intra-regional trade and improve infrastructure and connectivity, especially for small-scale producers”, explained Minister Mustapha.

“There is a rural and digital divide. In these times, we must encourage data use and efficiency among all farmers”, stated Minister Valenzuela. “It is very important to learn from the experiences of our sister nations. There is a rural and digital divide, but in the coming days we will share the valuable things we have learned. For instance, through the Natural Resources Information Center (CIREN), a study and information center for agriculture in our country, we will provide farms with information on alternatives for land use”, explained the Chilean minister.

The Minister of Agriculture of Panama, Augusto Valderrama, stressed that “we view technology as one of the only alternatives to become efficient and productive, do more with less, reduce pollution, and live in a sustainable world”, and highlighted the relevance of geospatial reference tools, drones, applications, and others.
In the same vein, the Deputy Minister of Agriculture of Ecuador, Eduardo Izaguirre, remarked that digital technologies allow for improving basic aspects such as “plot irrigation as well as statistics to predict the harvest and determine profitability, both at the phytosanitary level through detailed data that allows for predicting the impact of pests, and in product marketing, which is essential”.

“Digital agriculture would enable us to provide support through national agricultural research and extension plans”, noted the Deputy Minister of Honduras, Roy Lazo.

“At present, digital agriculture is an important issue for every country in Latin America: we view it as a tool that will enable us to improve our crop and production systems (…) We need to monitor crop areas and understand the country’s demand for products in order to determine import levels; in this regard, it would be a very useful tool. We hope to introduce digital agriculture and increase the efficiency of production systems. Digital agriculture would enable us to provide support through national agricultural research and extension plans – it would be a very useful tool. We congratulate IICA on this initiative to improve our food system”, added the Honduran official.

Ann Stapleton of the USDA remarked that digital transformation will facilitate progress in climate-smart agriculture, helping to “minimize the environmental footprint, improve value added for agricultural products, increase local production, as well as create justice, equity and opportunities to improve livelihoods in rural areas”. She explained that, to this end, it would be necessary to develop infrastructure, regulations and policies that support innovation.

“All of this allows for achieving efficiency in supply chains and facilitating access to affordable food for the entire population, but support from public policy instruments is necessary”, agreed SADER’s Coordinator for Agriculture, Santiago Arguello.

Vision and actions of the private sector

As part of the sessions and activities of the first day of Digital Agriculture Week, Bayer, the World Bank and Microsoft shared their vision and actions with respect to agricultural digitalization. The activity was moderated by Federico Bert, IICA specialist in Digital Agriculture, who coordinated the event.

“We design tailored solutions for sustainable resource management and increased productivity. The goal is to deliver world-class innovation, and the mission is to empower 100 million farmers by 2030. Access to information is what enables us to generate innovation; it is what we need to be able to impact productivity and help the world overcome the challenges facing humanity”, said Posso.

World Bank senior economist Joanne Gaskell highlighted the importance of “investing in transformational research and development, to develop digital solutions and technologies that are well adapted to what is most needed in agriculture”. She also presented an app developed by the company, which focuses on women entrepreneurs in Guatemala.

“The AgTech business is booming: its recent year-on-year growth rate has been 41%, which provides a valuable framework. Microsoft is working closely with startups, governments and IICA to carry out its mission to empower the agroindustrial ecosystem in Latin America, which is an engine of sustainable, resilient and inclusive growth, with socio-economic impacts for the region”, he explained in presenting Farmbeats, a data platform for agriculture.

During the opening of Digital Agriculture Week, Gbot Solutions and Milar, two startups from Argentina, also presented their digital solutions and innovations for use in agriculture.

The former applies robotics and artificial intelligence to radically transform the way crops are described; the latter initially focuses on software and subsequently on the creation of a device for selective spraying in weed control.

These companies are among the seven startups specializing in agricultural innovation from Argentina, two from Brazil and Chile and four more from Colombia, Guatemala, Mexico and Peru that were selected from 80 companies that applied to participate in Digital Agriculture Week with all expenses paid.

These AgTechs will be able to showcase their technological innovations, access high-level discussions and exchange ideas for digital transformation with international organizations. They will also have the opportunity to work with IICA to develop pilot projects to utilize their solutions in the Member States of the hemispheric organization specializing in agriculture and rurality.

In the coming days, Digital Agriculture Week will focus on academic and research issues, namely the benefits and potential risks of the digital transformation of agriculture, as well as the implications of digitalization for farmers and rural life. Precision Development (PxD) will share its experience with digital technical assistance, and New Mexico State University (United States) will share its perspectives and initiatives.

Participants will discuss the role of research, development and technological innovation mechanisms and institutes in the digital transformation process, as well as analyze the evolution of digitalization in agriculture, its current status and outlook.

Multilateral and collaborative organizations such as the Food and Agriculture Organization of the United Nations (FAO), the International Fund for Agricultural Development (IFAD), the Economic Commission for Latin America and the Caribbean (ECLAC), the European Union (EU) and the Tropical Agricultural Research and Higher Education Center (CATIE), will also have an opportunity to share their vision and actions with respect to the digital transformation of agriculture.

The forum will include presentations by various startups on digital solutions to increase production and efficiency; minimize the environmental footprint; tackle climate change; boost trade, value chains and cooperation among stakeholders; and support farmers’ decisions and management at the productive, economic and financial levels.

This event forms part of the hemispheric initiative launched by IICA called Mission ADA (Digital Agriculture in Action), which seeks to foster the dynamic and inclusive digital transformation of agriculture in the Americas.

“Digital technologies are one of the main tools for transforming agrifood systems as well as improving productivity, sustainability and inclusion”, concluded IICA Director General Manuel Otero, who highlighted the role of startups in advancing the sector’s digitalization.

“Why is that? Many digital solutions are developed by small-scale entrepreneurs and have great potential to be scaled up, as is common in the digital world. IICA is committed to driving digital transformation and we want to contribute to making it dynamic and inclusive, leaving no one behind”, he added.

Digital Agriculture Week is broadcast in Spanish on IICA’s Facebook page, and in English and Portuguese on its YouTube channels  (@IICAnews and @IICAnoticiaspt).

Ambassador of Italy to St. Kitts & Nevis presents credentials to The Governor-General