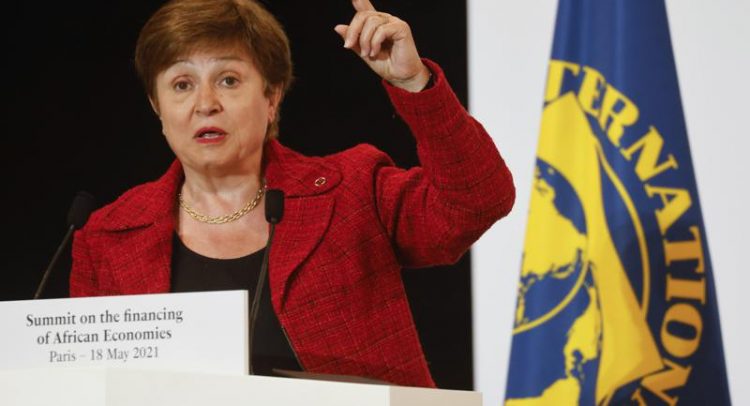 By PAUL WISEMAN and MARTIN CRUTSINGER

WASHINGTON (AP) — The International Monetary Fund is sharply upgrading its economic outlook this year for the world’s wealthy countries, especially the United States, as COVID-19 vaccinations help sustain solid rebounds from the pandemic recession. But the 190-country lending agency has downgraded its forecast for poorer countries, most of which are struggling to vaccinate.

Overall, the IMF said Tuesday that it expects the global economy to expand 6% this year — a dramatic bounce-back from the 3.2% contraction in the pandemic year of 2020. The IMF’s forecast, unchanged from its previous estimate in April, would mark the fastest calendar-year global growth in records dating to 1980.

Beneath the worldwide number, however, a gap between the vaccine haves and have-nots is widening. The IMF expects advanced economies to grow 5.6% this year, an upgrade from the 5.1% it forecast in April, fueled by the swift recovery of consumers and businesses. But it downgraded its 2021 forecast for emerging market and developing countries to 6.3% from its April forecast of 6.7%.

“The recovery is not assured until the pandemic is beaten back globally,” Gopinath said. She asked that wealthy nations quickly fulfill their pledges to supply 1 billion does of the vaccine to developing nations.

“Concerted, well-directed policy actions … can make the difference between a future where all economies experience durable recoveries or one where divergence is intensified, the poor get poorer and social unrest and geo-political tensions grow.,” she said.

Advanced economies, in which close to 40% of the population has been vaccinated, are largely reopening after last year’s COVID-19 lockdowns. But in developing and emerging market countries, the vaccination rate is just 11%. Moreover, the governments of poorer countries cannot match the outpouring of government spending that rich countries have been using to propel their economic recoveries.

The United States is expected to register 7% growth this year, a sharp reversal from last year’s 3.5% drop and an upgrade from the 6.4% growth the IMF had forecast for 2021 back in April.

President Joe Biden’s ambitious spending plans are expected to fuel growth this year and next. The IMF predicts that the U.S. economy will grow 4.9% in 2022, up from the 3.5% it projected three months ago.

The 19 European countries that share the euro currency are forecast to grow 4.6% collectively this year, versus last year’s 6.5% contraction. Japan, which endured a 4.7% drop in economic growth in 2020, is expected to expand 2.8% this year. But the 2021 forecast for Japan marks a downgrade from what the IMF expected in April, reflecting a resurgence of COVID-19 cases earlier this year.

In the developing world, the outlook for China, the world’s second-largest economy after the United States, was marked down to 8.1% after the government scaled back spending and investment. The IMF also slashed its growth forecast for India to 9.5% from 12.5% three months ago after the country was overwhelmed by COVID cases.

Despite the brighter outlook for major economies, the outlook across the world has been clouded by uncertainty over the delta variant of the coronavirus and the uneven progress of vaccination campaigns.

In the update to its World Economic Outlook, the IMF expressed concern that any major resurgence of inflation would pressure the world’s central banks into raising interest rates and thereby threatening the global recovery. Still, it expects inflation to return to pre-pandemic levels in most countries next year.

FILE – In this May 18, 2021 file photo, International Monetary Fund (IMF) Managing Director Kristalina Georgieva speaks at the end of the Financing of African Economies Summit, in Paris. The executive board of the International Monetary Fund has approved a $650 billion expansion of the resources of the 190-nation lending institution aimed at providing more support for vulnerable nations as they battle the coronavirus pandemic. Georgieva said in a statement Friday, July 9, that the new support, the largest such expansion in the agency’s history, would be a “shot in the arm for the world.” (Ludovic Marin, Pool via AP, File)