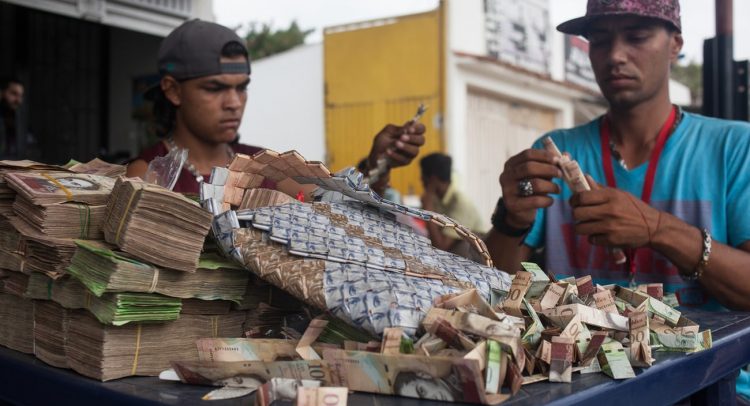 ‘Millionaires are poor’: Venezuelans struggle to survive as inflation spirals 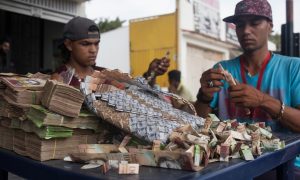 As a five-year crisis continues, people are unable to afford food and medicine – even as Nicolás Maduro tightens his grip on presidential power.

Two years ago, shoppers in Venezuela would pay fruit sellers like José Pacheco with boxfuls of 100 bolívar notes – then the currency’s highest denomination. Now, thanks to rampant hyperinflation, even those are useless.

“It’s crazy to accept notes of 100, 500, or 1000 bolívares,” said Pacheco, a wiry 61-year-old, whose humble stall clings to the fringe of one of the major markets in Ciudad Guayana, a city in Venezuela’s southern Bolívar state.

He now only accepts newly minted 100,000 bolívar notes, which due to demand are hard to come by. “Otherwise it’s a box [full of notes] that afterwards we have to take to the bank,” he said.

Inflation in the embattled South American country could reach one million per cent by December,, reflecting an economic crisis comparable to Germany’s after the first world war and Zimbabwe’s at the beginning of the last decade.

Venezuela, which has the largest proven oil reserves on the planet, is in the midst of a five-year crisis that has left many of its people unable to afford food and medicine, with shelves bare in supermarkets. Crime rates continue to set records, with local residents fearful to leave the house at night.

Alejandro Werner, the head of the IMF’s western hemisphere department, elaborated on the grim prognosis. “We expect the government to continue to run wide fiscal deficits financed entirely by an expansion in base money,” he wrote in a blogpost on Monday night, “which will continue to fuel an acceleration of inflation as money demand continues to collapse.”

For ordinary Venezuelans, everyday life has become a struggle to survive.

“We are millionaires, but we are poor,” said Maigualida Oronoz, a 43-year-old nurse, who earns the minimum monthly salary of 5m bolívares – barely enough to buy a kilogram of meat to feed her children. “We can just about eat, but if some health emergency happens we’ll die because the prices of medicines are sky-high and rise every day.”

Many blame the country’s woes on President Nicolás Maduro, who in turn alleges that Venezuela is on the receiving end of an “economic war” waged by the United States and Europe.

Despite spiraling hyperinflation, Maduro has continued to tighten his grip on the power he inherited from Hugo Chávez, Venezuela’s late leader, whose charisma carried him through tougher times.

Maduro, who lacks his mentor’s charm, won a second six-year term in elections held in May, though opposition politicians and many countries say the result was illegitimate.

Maduro has alleged that private bankers are smuggling cash into neighbouring Colombia as part of an elaborate conspiracy to sabotage the economy, and he has rejected calls to lift currency controls.

One of Maduro’s plans to alleviate inflation is to issue new banknotes with the last three zeros lopped off, though economists say that will do little to help.

“It’s a cosmetic solution that won’t do anything,” said Asdrubal Oliveros, director of Ecoanalitica, a Caracas-based economics consultancy. “With inflation this wild, in a few months we’ll be back in the situation.”

Unlike in 1920s Germany, people in today’s Venezuela are not carrying wheelbarrows of cash to buy groceries. Instead, they have turned to electronic transactions. But 40% of Venezuelans do not have bank accounts, while others are unwilling to use credit cards or bitcoin to pay for for smaller items, so bartering has become common.

“The paradox is that this is a country undergoing a deep inflation crisis and yet nobody actually has any cash,” said Geoff Ramsey, assistant director for Venezuela at the Washington Office on Latin America, a DC-based thinktank. “You’re seeing wealthy people pay for parking with granola bars.”

Hit particularly hard are pensioners who receive their monthly payments in cash. Saúl Aponte, a 73-year-old retiree, currently buys half a carton of eggs with 20 100,000-bolívar notes. “At the end of the year, if they pay the pension in cash we will have to go with a wheelbarrow to buy the same half a carton,” he said outside a shopping mall in the city centre.

Fed up with economic despair, masses of Venezuelans are simply fleeing. More than a million have arrived in Colombia, where, in the border city Cúcuta, some entrepreneurial Venezuelans have begun weaving valueless banknotes into handbags that sell for 20,000 Colombian pesos (approximately £5).

Serena Williams says she is being 'discriminated' against over doping tests