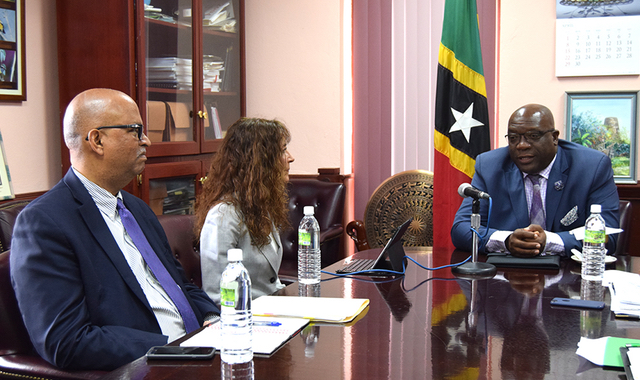 Basseterre, St. Kitts, 5th April, 2018 (MyVueNews.com) – A visiting team from the International Monetary Fund (IMF) said they are satisfied with the progress of St. Kitts and Nevis.

Sònia Muñoz, the new Division Chief of the Caribbean Division, and who headed the delegation, said she was pleased to work with Prime Minister Dr. Timothy Harris, who is the Minister of Finance, to achieve the policy objectives set by the Government.

In the last Article IV Consultation on St. Kitts and Nevis, the IMF concluded that projected growth will be around 3 per cent under current policies and conservative assumptions about inflows from the Citizenship By Investment (CBI) program.

The document reads in part, “The projected slowdown in construction linked to lower CBI inflows is expected to be offset by public infrastructure investment and higher tourism growth, as source market growth accelerates and new tourism facilities come on stream through 2019. Inflation is projected to rise with the expected rise in fuel prices, remaining around 2 percent in the medium term. The current account deficit should remain large with CBI inflows tapering off.”

It continued, “Key risks to the outlook include a sharper drop in CBI inflows, further delays in completing the sale of lands under the debt-land swap arrangement, loss of CBRs, and a stronger U.S. dollar. Stronger-than-expected CBI inflows from the ongoing reforms and continued oil-price weakness could surprise on the upside.”