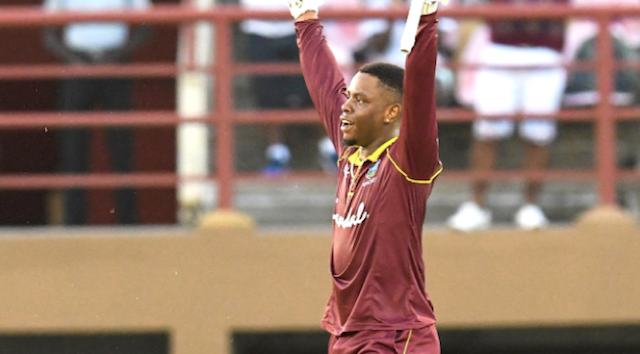 Rising batting star Shimron Hetmyer’s heavy scoring in the recent one-day series against Bangladesh has seen him jump a massive 77 places in the ICC batting rankings.

The 21-year-old left-hander was the biggest mover in the latest release of the rankings, and now lies 59th in the charts currently topped by Indian stroke-maker Virat Kohli.

Hetmyer found a purple patch in the three-match series against the Tigers, pummeling 207 runs at an average of 69. He struck his second ODI hundred (125) in the second match in his native Georgetown last Wednesday, helping the Windies to a narrow three-run series-leveling victory.

The former ICC Under-19 World Cup-winning captain scored 52 in the opening ODI which the hosts lost by 48 runs, and chipped in with 30 in Saturday’s last match when the Windies slipped to a 18-run defeat to concede the series 2-1.

Hetmyer made his ODI debut last December on the tour of New Zealand and has since played 12 matches.

Veteran Chris Gayle also gained in the rankings, leaping 12 places to 66th after scores of 40, 29 and 73 while Shai Hope moved up five spots to 45th, after scoring 148 runs at an average of 31, including a half-century in the final contest.

The right-handed Hope is the highest-ranked West Indies batsman, with Marlon Samuels, who missed the series through injury, the next best at 52nd.

In the bowling charts, off-spinner Ashley Nurse jumped into the top 50 after moving up 25 places to 38th while leg-spinner Devendra Bishoo broke into the top 100 at 92nd, after climbing 31 spots.

Again, there are no West Indies players in the top 20, with Holder the highest-ranked at 27th.

India’s Jasprit Bumrah tops the rankings in an unchanged top 10.

Apple jumps 5% as it races to $1 trillion market cap