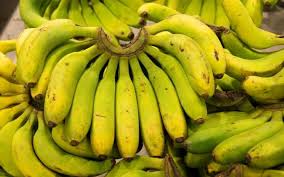 Yellow is the new green in the French Caribbean archipelago of Guadeloupe.

Bananas are the island group’s top agricultural export, and there is growing awareness that farming practices need to change as yields drop and damage from pesticide use rises.

Mindful of the biodiversity in his banana grove at Capesterre-Belle-Eau on the island of Basse-Terre, farmer Jean-Louis Butel follows the French Government’s recommendations on sustainable agriculture.

“Environmental activists had us visit banana groves at night. We saw bats and 300 or 400 other species living in the grove,” Butel says.

In recent years, yields in areas where bananas are grown exclusively have been on the decline.

On the positive side, attitudes are finally changing over the use of the pesticide chlordecone, which continues to pollute the soil despite being banned since 1990.

Those factors combined have encouraged Butel to switch to more sustainable methods.

Since 2007 “we haven’t used any pesticides or nematicide (against roundworm parasites), and in 2014 we stopped using herbicides”, he says.

Overall, banana growers in Guadeloupe have reduced by 70 per cent their use of pesticides, according to Jacques Louisor of the Tropical Technical Institute.

The final hurdle for many farmers is giving up treatments against the fungus that causes the leaf spotting disease called black sigatoka and can cause yields to plunge by half.

Researchers may soon be able to provide a solution: scientists at the France-based agricultural research centre CIRAD have developed a banana variety that is partially resistant to the disease.

The variety, dubbed CIRAD 925, has a slightly different taste.

It has hit the market in Guadeloupe, and by the end of the year it could go on sale in the French mainland. By 2020 it may allow farmers to transition to organic agriculture.

Marc Dorel, a researcher at CIRAD, said ending the use of pesticides is not the only obstacle that remains to shift to organic production. Issues regarding the fertilisation of the crop also remain to be resolved.

And then there is the cost.

To ensure food security and adapt to climate change one has to look beyond industrial-scale agriculture.

Technical researchers have all too often ignored the significance of small farms, seeing them as little more than subsistence operations.

“But in fact they are home to great biodiversity and we can seek their help in the push for agroecology, because they are more resilient than monoculture farms,” Ozier-Lafontaine explained.

INRA, which wants Guadeloupe to transition to an agroecology model, is developing animal feed using local products in a bid to reduce reliance on imports.

The centre is also researching the shift towards a more restorative and sustainable circular economy in order to make better use of resources.

What’s the difference between indoor and outdoor allergies?