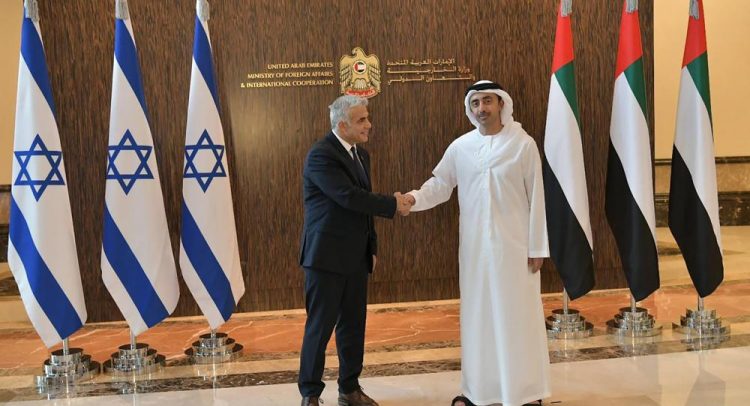 “Nobody is denying the fact that tensions in Jerusalem endanger the entire area,” Yair Lapid told reporters in Dubai.

He spoke to select foreign media on the final stretch of a historic two-day visit to the Gulf Arab state. It was the first official visit by an Israeli minister to the UAE since the two countries agreed to establish full ties nine months ago.

The visit, however, garnered little fanfare across Emirati media and Lapid did not have an audience with the country’s de-facto leader, Abu Dhabi Crown Prince Mohammed bin Zayed Al Nahyan.

Rather, he met with his Emirati counterpart, Sheikh Abdullah bin Zayed Al Nahyan, who hosted an official reception for the Israeli delegation Tuesday.

Lapid also inaugurated the Israeli diplomatic missions in Abu Dhabi and Dubai during his trip. No senior Emirati Cabinet officials have traveled to Israel, though the UAE has established a diplomatic presence in Tel Aviv.

The visit comes on the heels of last month’s devastating 11-day war in the Gaza Strip in May, which killed more than 250 Palestinians, including 66 children. In Israel, 13 people died as a result of the war with Gaza, including two children.

Emotions ran high during the conflict among the Arab public, and continue to simmer with the Gaza cease-fire on shaky ground and tensions still tense in Jerusalem.

The war was sparked when Hamas militants in Gaza fired rockets at Israel in response to violence in Jerusalem between Israeli forces and Palestinian protesters and worshippers at Al-Aqsa Mosque, a site holy to Muslims and Jews. Efforts by Jewish settlers to evict Palestinians from their homes in east Jerusalem further aggravated tensions in the city.

“Nobody wants riots in Jerusalem,” Lapid said. “It’s in everybody’s best interest to make sure Jerusalem is as quiet as possible.”

The flare-up in Jerusalem on the final days of the Muslim holy month of Ramadan presented the first major test of rapidly developing relations between Israel and the UAE. The U.S.-brokered agreement, which was signed by then-Israeli Prime Minister Benjamin Netanyahu, was the first of its kind by an Arab state with Israel in over two decades, and it paved the path for similar announcements by Bahrain, Sudan and Morocco.

When tensions boiled-over in Jerusalem last month, the UAE issued a rare public rebuke of Israel and called on authorities to de-escalate the situation and show maximum self-restraint to prevent further regional instability. The Emirati government’s tone reflected the sensitivities that persist among Muslims worldwide around the sovereignty of Al-Aqsa and the Palestinian struggle against occupation.

The conflict appears to have also set back U.S. efforts to promote more Israeli normalization accords with other Arab states. It may have also slowed down the pace of progress with Sudan.

“I wish we have with Sudan what we just had here,” Lapid said, referring to the UAE.

The minister said Israel’s goal is to have so-called Abraham Accords with all Arab states. “If we will be able to push forward with the Saudis, we’ll be happy to do so,” he said.

Lapid, a former Israeli anchorman who heads a centrist Israeli party, was newly sworn in as foreign minister weeks ago upon the formation of a new Israeli government led by right-wing politician, Naftali Bennett.

He said the new coalition government’s intention is to have better dialogue with people on the ground, though he made no mention of the Palestinians nor prospects for reviving the moribund peace talks.

When asked about the blockaded Gaza Strip, Lapid said Israel has no interest in fighting Gaza, but stressed Israel will never accept rocket fire from Hamas.

Lapid declined to discuss any details of his conversation with his Emirati counterpart. The two countries share strong objections about Iran’s nuclear accord with world powers, which the Biden administration is seeking to revive and expand.

He did, however, say that he spent time connecting Emirati ministers with their counterparts in the new Israeli government, including the minsters of energy. He described the UAE as Israel’s “new friends.”

While he did not give a number on size of bilateral investments, he was quoted in the UAE state-run news agency saying bilateral trade had reached more than $675 million. Included in that is $272 million of trade with Dubai. The two sides are also discussing putting in place a free trade agreement.