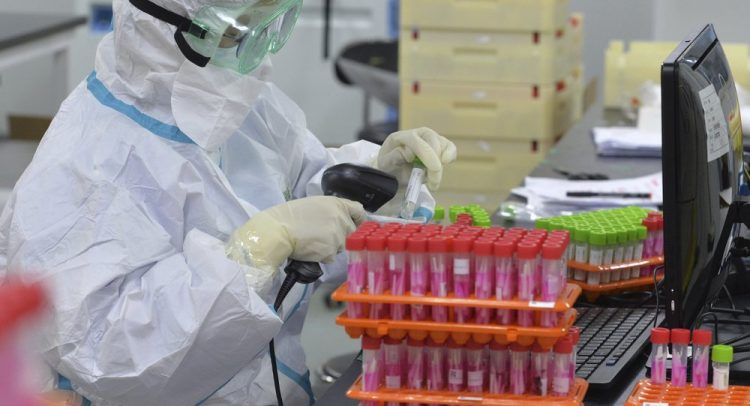 Modi’s Tuesday meeting with state leaders came as India’s total infections soared past 9.18 million. More than 134,000 Indians have died due to COVID-19.

Modi said his government is keeping track of vaccine development in the country and is in touch with vaccine developers across the world. He says “our priority is to make the vaccine available for all,” Modi said.

India is home to some of the world’s biggest vaccine makers and there are five vaccine candidates under different phases of trial here. But the state-run cold chain facilities used to keep some vaccines consistently refrigerated would be inadequate for the enormous challenge of rolling out a COVID-19 vaccine.

To address this issue, Modi’s government is augmenting the cold chain and transport mechanism for the vaccines. It is also readying a database of healthcare and frontline workers who will be inoculated first.

HERE’S WHAT ELSE IS HAPPENING:

BERLIN — State and federal health authorities in Germany say they are shortening quarantine periods for people who have come into contact with a confirmed COVID case from 14 days to 10, if they provide a negative test.

Officials said Tuesday that people who have previously had COVID-19 themselves and recovered do not need to quarantine anymore if they come into contact with a newly diagnosed patient, unless they show symptoms of illness.

Health officials have asked federal authorities to provide a legal basis for specially trained teachers to perform rapid antigen tests for the virus. Such tests are increasingly seen as an effective tool for screening people in schools and are deemed sufficient for shortening the quarantine period.

The government said Tuesday that 1,302 new coronavirus cases were confirmed in the last 24 hours, which raises the number of overall cases to 67,080. It has a total of 1,156 confirmed virus deaths.

The country of 2 million people has introduced strict lockdowns and other health measures to try to stem the outbreak.

Estonian Prime Minister Juri Ratas said the spread of coronavirus is at a critical level in the country, especially for its medical system, for the number of COVID-19 patients is still increasing.

The small Baltic nation of 1.3 million has seen the number of daily coronavirus cases rising rapidly in the past two weeks, with 204 new cases in the past 24 hours. The 14-day average of new cases is now about 284 per 100,000 inhabitants.

BERLIN — Germany’s 16 states want people to self-quarantine for several days before visiting family at Christmas, to reduce the risk of spreading the coronavirus to elderly and vulnerable relatives.

The dpa news agency reported Tuesday that states have agreed among themselves on a proposal for tightening Germany’s partial lockdown measures in the coming weeks, so they can be relaxed over the festive period.

The plan, which also suggests bringing forward school breaks and that employers should let staff work from home, will be discussed Wednesday at a virtual meeting with Chancellor Angela Merkel.

Germany’s disease control agency recorded 14,361 newly confirmed cases of COVID-19 in the past day, and 249 further deaths. Germany has done relatively well in the pandemic, with an overall death toll of 14,400, one-fourth that of Britain’s.

LONDON — The British government says people arriving in England from a destination not on its coronavirus safe list will from next month be able to reduce the time they have to quarantine themselves if they test negative for the virus.

Transport Secretary Grant Shapps said the 14-day quarantine period can be reduced if people have a negative test from five days after their arrival.

The change, which takes effect on Dec. 15, has been long-awaited by the travel industry, one of the worst-hit sectors during the pandemic.

Under the new rules, passengers can reduce the 14-day period by paying for a test from a private firm on or after day five at a cost of potentially 100 pounds ($133). Results are normally issued in 24 to 48 hours.

MANILA, Philippines — Philippine officials say about 60 million Filipinos are being targeted for vaccination against the coronavirus next year at a cost of more than 73 billion pesos ($1.4 billion) to develop considerable immunity among a majority of Filipinos.

Carlito Galvez Jr., who oversees government efforts to secure the vaccines, said late Monday that negotiations were underway with four Western and Chinese pharmaceutical companies, including U.S.-based Pfizer Inc. and China’s Sinovac Biotech Ltd., to secure the vaccines early next year. One company based in the U.K., AstraZeneca, can commit to supply up to 20 million vaccines, he said.

“We will target the most vulnerable and the poorest communities in areas that were affected,” Galvez said, addressing who would be prioritized for vaccination.

President Rodrigo Duterte said he wanted police and military personnel to be prioritized for their many sacrifices, including in disaster-response work.

The Philippines has had more than 420,000 confirmed cases, the second-most in Southeast Asia behind Indonesia, and 8,173 deaths.

BEIJING — China has reported new coronavirus cases in the cities of Shanghai and Tianjin as it seeks to prevent small outbreaks from becoming larger ones.

The National Health Commission said Tuesday that there were two new locally spread cases in the previous 24-hour period, one in each city. It also reported 20 cases among people who had arrived from overseas.

In Shanghai, the mass testing of 17,719 workers at the city’s Pudong aiport found one infection, a Fedex employee. Everyone else tested negative.

Three UPS workers at the airport have also tested positive in recent days, along with the wife of one of them. In all, Shanghai has reported eight non-imported cases since Friday.

In Tianjin, where 2.3 million people had been tested as of Monday, the city reported one case in a person who developed symptoms after testing positive earlier. China does not include people without symptoms in its confirmed case count.

To date, the health commission has recorded 4,634 deaths.

LOS ANGELES — Restaurant owners in Los Angeles County were trying to pivot Monday to a model that would keep them afloat when an order goes into effect Wednesday closing all dining for three weeks.

Owners said they were upset that the county had taken the action, claiming infections are more likely coming from private gatherings where rules aren’t enforced.

“The same people desperate to go to bars are going to party in their houses,” said Brittney Valles, owner of Guerrilla Tacos in downtown Los Angeles.

Valles was working Monday to develop a plan to keep as many of her workers employed as possible.

ANCHORAGE, Alaska — Norwegian musher Thomas Waerner said Monday that he won’t defend his title at next year’s Iditarod Trail Sled Dog Race because of restrictions and uncertainty over travel during the coronavirus pandemic.

“I cannot find a way to get the dogs to Alaska,” Waerner said in an email to The Associated Press.

As he learned earlier this year, getting to Alaska is only half the battle: Waerner wasn’t able to return to his wife and five children in Torpa, Norway, for months after winning the world’s most famous sled dog race because travel was restricted as the pandemic took hold. The Iditarod was one of the few professional sports that wasn’t canceled last March.

While the defending champion says he won’t participate in the 1,000-mile (1,609-kilometer) race across the rugged Alaska terrain, the Iditarod is still scheduled to start March 7.

That includes a fan-friendly ceremonial start a day earlier that usually attracts thousands of people in Anchorage.

Waerner hopes to return to the race in 2022.

LOS ANGELES — The largest county in the United States is on the brink of a stay-home order after a coronavirus surge surpassed a level set by Los Angeles County public health officials to trigger such an action.

A swell of new cases Monday put the county over an average of 4,500 cases per day.

A stay-home order would be the first such action since mid-March, when Gov. Gavin Newsom followed several counties and issued a statewide order that closed schools and most shops.

In Los Angeles, the county of 10 million residents has had a disproportionately large share of the state’s cases and deaths.

SEATTTLE — A four-week shutdown on indoor service at restaurants and bars in Washington state prompted by an alarming spike in COVID-19 cases is expected to cost the industry some $800 million.

Anthony Anton, chief executive of the Washington Hospitality Association, urged lawmakers from both parties Monday to begin figuring out ways to support restaurants as well as hotels and other hospitality businesses so they have a plan ready to go when the Legislature next meets.

Gov. Jay Inslee announced Friday an additional $70 million in grants for businesses, as well as $65 million for loans and other assistance.

Anton said that while anything helps, that would only cover about two days of losses.

HELENA, Montana — The Montana governor’s office says more than 100 contracted medical staff have arrived in the state to assist hospitals in responding to the spike in COVID-19 cases.

The 110 health care workers are part of an anticipated total of 200 to be deployed in the state before Thanksgiving and who will remain until the end of the year.

The workers, including registered nurses and respiratory therapists, will aid hospitals that are at or near capacity as part of a contract between the state and NuWest, which provides traveling health care workers.

LOUISVILLE, Ky. — Kentucky Gov. Andy Beshear is warning that the state’s health care system could be at risk — and lives at stake — from rising pressures of new coronavirus hospitalizations if conditions do not improve.

He made the remarks while defending the new mandates he issued last week to fight the pandemic.

The Democratic governor’s new restrictions on in-person gatherings at restaurants, schools and event venues have drawn criticism from GOP lawmakers, local business owners and private schools throughout the state. Kentucky’s Republican attorney general, Daniel Cameron, joined a Christian school on Nov. 20 in filing a federal lawsuit that seeks a statewide temporary restraining order against a new rule that suspends in-person classes in private and public schools.

Under the new restrictions, middle and high schools will continue with remote instruction until January. Elementary schools may reopen on Dec. 7 unless it is in the red zone, the highest category for COVID-19 incidence rates.

Hogan said state troopers will work with liquor boards, local law enforcement agencies and others starting at 5 p.m. Wednesday to ensure that businesses and residents follow directives meant to slow the spread of the coronavirus, including the mask-wearing mandate.

He said the Maryland State Police is also ramping up the hotline that the public can dial to report violations and is now operating a new phone line to assist local compliance officers.

SAN DIEGO — A California judge on Monday denied a request to temporarily restore indoor service at restaurants and gyms in San Diego County that were forced to move operations outside earlier this month to slow the spread of the coronavirus.

Business owners in California’s second most populous county sought to restore indoor operations at 25% capacity for restaurants and 10% for gyms, which were the rules before a surge in infections earlier this month.

Two San Diego restaurants and two gyms sued on behalf of their industries, asking that California’s four-tier system of pandemic restrictions be declared illegal. San Diego, like nearly all of the state’s counties, was moved into the most restrictive tier and forced to move many business operations and religious services outside.

The judge scheduled another hearing next month.

Masin Photo: A medical worker scans the nucleic acid samples collected from a mass testing at a lab in north China’s Tianjin Municipality on Monday, Nov. 23, 2020. China has reported new coronavirus cases in the cities of Shanghai and Tianjin as it seeks to prevent small outbreaks from becoming larger ones. (Chinatopix via AP)

Taraji P. Henson Reflects on How She’s Doing Since Ending Engagement: ‘I Am Much Better’