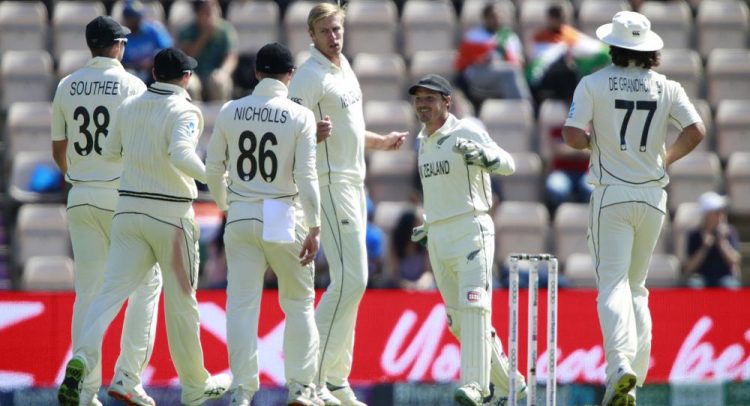 India slips to 130-5 against energized NZ in WTC final

India stuttered to 130-5 at lunch on a sunny day at the Rose Bowl for an overall lead of 98 runs with still a minimum 73 overs left in the final.

Resuming at an overall lead of 32, Jamieson (2-21) claimed the wickets of Virat Kohli (13) and Cheteshwar Pujara (15) in his successive overs and could have followed it up with the wicket of Rishabh Pant, but Tim Southee dropped a regulation catch in the slips.

Pant, who also survived a leg before wicket television referral, was unbeaten on 28 while Ravindra Jadeja was not out on 12 at the break after hitting two boundaries.

The probing line of Jamieson outside the off stump troubled both Kohli and Pujara from the onset as India resumed on an overnight 64-2. The Indian captain was set up by the 6-foot-8 Jamieson for the second successive time when he got a faint edge behind the wicket and Pujara was caught well by Ross Taylor in the first slip.

Ajinkya Rahane (15) and Pant pushed the lead to 77 before Rahane fell to a reckless shot against Trent Boult when he tried to flick the left-arm fast bowler but was caught by BJ Watling down the leg side.

There was a provision of a sixth day in the WTC final and New Zealand had fought its way back after two days of play were washed out due to rain.